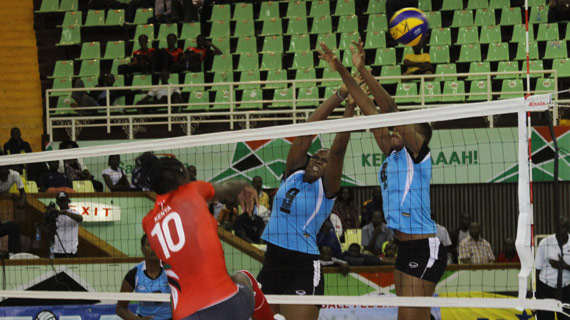 Kenya's Junior Malkia Strikers on Sunday evening begun their Africa title chase with a straight sets win over hard  fighting Botswana as the CAVB U-23 Africa Cup of Nations started at the Safaricom Indoor Arena Kasarani in Nairobi.

With a score line of 3-0 (25-14, 31-29, 25-20)  the team coached by Catherine Mabwi had to  endure a hard battle especially in their second set  where they were forced to stretch the match to 30 points before breaking through with an Ann Lowem strike.

Having taken the first set with ease, the junior Malkia Strikers approached the second set with less caution making numerous errors that allowed the Botswana side back into the match. Botswana , led by Moilamo Nkobedi had a fine performance in the set pushing Kenya on every point and they looked like they would pick a set from the hosts but a weak serve on the net at 27-26 allowed the hosts back into the match .

The third set looked easy for Kenya as they stretched away to lead 11-4. The Kenyan technical team made several changes including swapping liberos  but this almost gave the Botswana side quick chances for comeback through repeated errors. Despite a spirited comeback,Kenya stayed determined and won the set 25-20.

On Monday Kenya will face Egypt in a match that is likely to determine who could book the sole slot to the Slovenia in 20917 for the World Junior Champion ships.

The tournament is being played on a round robin format with five teams taking part namely:  hosts Kenya , Egypt , Rwanda, Botswana and Senegal.