Joash full of praise for Migne after SJAK top award 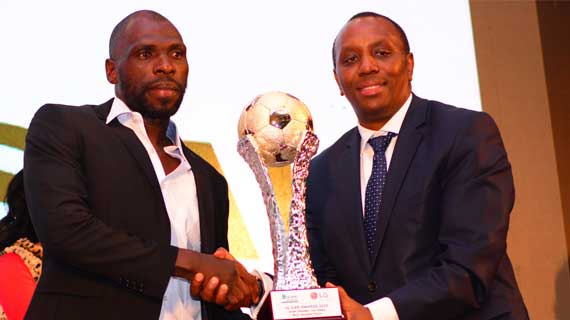 “I want to thank coach Migne because he was the one who gave me the confidence to be where I am today. He handed me my first ever national team chance and that has contributed to me getting this award,” Joash said.

The former Western Stima stopper was thrown into the deep end by Migne handing him his national team debut for the Africa Cup of Nations qualifier against Ghana’s Black Stars in Nairobi. Though he was sent off in the second half, Joash was one of the best performers in the game.

He went on to command a regular place in the starting team and only injury ruled him out of playing at the Cup of Nations in Egypt.

“I had always dreamed of being here and I always said one day I have to stand on this podium. I am so happy and I also want to thank my teammates who gave me the support to be here on and off the field,” he added.

Kahata has also since moved, joining Tanzanian side Simba and was on target over the weekend as they beat Azam FC to clinch the season-opening Community Shield.

Tusker FC’s David Majak was named the young player of the year while former Gor boss Hassan Oktay was awarded as coach of the year ahead of Bandari’s Bernard Mwalala and Sofapaka’s John Baraza.