I don’t know where Avire is, says Migne 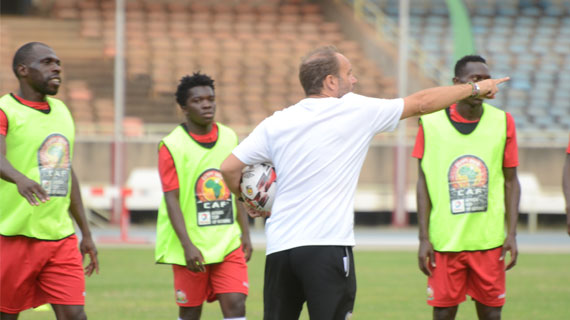 Stars are expected to fly out to Dar es Salaam on Saturday morning for the Sunday evening game with the second leg scheduled for August 4 in Nairobi.

Harambee Stars head coach Sebastien Migne is distressed as he is set to miss yet another player ahead of the African Nations Championship first leg first round qualifier against Tanzania in Dar es Salaam on Sunday.

With Faruk Shikalo and Francis Kahata already ineligible after moving to a league outside Kenya, winger Paul Were is also unavailable as he works on a transfer while to Migne’s own admission he does not know where Sofapaka striker John Avire is.

That brings to four the number of his senior team players who will be absent for the game against Tanzania in Dar.

“Avire, I don’t know where he is maybe you can tell me. If you have any news you can tell me,” said Migne of the absence of the striker who has been at the centre of a storm between the Football Kenya Federation and his club over an alleged move to an Egyptian club.

Avire’s absence leaves Migne exposed in attack while Shikalo’s move is the biggest hit below the belt for the tactician as he had earmarked him for the number one slot.

“It’s difficult like when we lost Faruk. We need to find an option but now I don’t have an answer. I know Piston but for Kip (Nicholas Kipkurui) and Enosh (Ochieng), I don’t know them at this kind of level. It is another step for them but we will see,”

“Of course we have lost a lot of mature players for this level. It will be difficult but it will be a good opportunity for some players to show me their qualities. We will play with players without huge experience,” Migne said.

Stars are expected to fly out to Dar es Salaam on Saturday morning for the Sunday evening game with the second leg scheduled for August 4 in Nairobi.