How does the Kenyan Premier League compare with other leagues in sub- Saharan Africa? 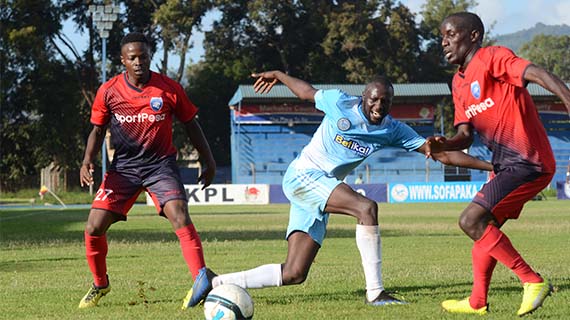 There has been talk of the national association, the Football Kenya Federation, taking over the running of the league once the KPL management's current contract expires at the end of this season,

These are not the best of times for the Kenyan Premier League, with the league currently lacking a sponsor and clubs struggling to meet their financial obligations.The situation has not been helped by the current coronavirus pandemic, which has slowed the growth of economies and forced a shutdown of many sporting activities,including the Kenyan Premier League.

Before the league went on break in mid-March, traditional giants, Gor Mahia led the way with 54 points from 23 matches, seven points clear of second-placed, Homeboyz, who have played a game less than the leaders.

Gor Mahia is the most successful club in the country with 18 league titles.

There was a period when the Kenyan top flight enjoyed a relative economic boom and competed favorably with other leagues in sub-Saharan Africa, but the KPL has taken a few steps back in the last few months.

Up until late 2019, the league was sponsored by sports betting giants, SportPesa, but the company ended its contract with the KPL, and indeed, its operations in Kenya after the government imposed unfavorable tax laws on betting sites in the country. The SportPesa deal was worth Sh259 million over three years.

SportPesa's association with the Kenyan Premier League also saw an increase in online betting in the East African nation, with many football enthusiasts wagering on KPL clubs, as well as their favorite European teams like Manchester United and Barcelona.

The Kenyan top flight also had a deal with African media heavyweights, SuperSport, signed in April 2017 and meant to run till 2021, but that has since been terminated following a disagreement between the league and the broadcasters. SuperSport were unhappy with the KPL's decision to uphold a ruling by the Sports Dispute Tribunal (SDT), which directed that the number of teams in the premier division be increased from 16 to 18 teams.

Unfortunately,with its current financial problems,the Kenyan league severely lags behind other leagues in the region.South Africa's Premier Soccer League is far and above everyone else in sub-Saharan Africa in many ways, including infrastructure, media, and in the financial strength of their league. At the end of last season, the PSL announced record-breaking revenues, totaling over a billion rands.

The Ghana Premier League recently signed a new sponsorship deal with broadcasters, StarTimes, worth $5.25million dollars over five years, while the Sudanese league continues to benefit from the country''s oil riches. There are a few other examples of well-sponsored leagues across sub-Saharan Africa, but the KPL continues to struggle in this department.

There has been talk of the national association, the Football Kenya Federation, taking over the running of the league once the KPL management's current contract expires at the end of this season, but given the recent controversies surrounding the federation elections, that idea isnt exactly filling Kenyan football followers with much optimism.

"We understand the concerns of the Kenyan Premier League clubs, but I am certain the situation will soon change for the better" FKF president, Nick Mwendwa said in January.  "By the time we take over the running of the league in August, we will have sponsors in place to ensure the competition runs smoothly"

Kenyan clubs have struggled on the continental stage

Apart from financial strength and sponsorship deals, one other barometer that reflects the quality of a league is the performance of its clubs on the international stage. Over the years, the North Africans have dominated CAF continental competitions, with Egypt producing African champions on 14 different occasions, and Tunisia and Morocco contributing six each.

The Democratic Republic of Congo lead the way in sub-Saharan Africa, with TP Mazembe winning the CAF Champions League five times, and Vita Club adding one triumph. West and Central African teams have generally been the peak of the bunch outside North Africa, with great clubs like Canon Yaounde and Union Douala (Cameroon), Hearts of Oak and Asante Kotoko (Ghana), ASEC Mimosas and Africa Sports (Côte d'Ivoire), and Enyimba (Nigeria) making their marks on the continent.

Despite being relatively new, the South African league is catching up very quickly. Orlando Pirates and Mamelodi Sundowns have both been African champions, while Kaizer Chiefs won the defunct Cup Winners’ Cup in 2001.

Unfortunately, no Kenyan club has won a continental title, with the closest they got being Gor Mahia's runner-up finish in the Cup Winners; Cup in 1979. Also, the Kenyan national team hasn't exactly set the continent and the world alight, with their best finish at the Africa Cup of Nations coming in 1972, when they were fifth. The Harambee Stars have been to the AFCON on just six occasions, and have never qualified for the World Cup.

One way of addressing these international failings is by looking inwards and running a well organized and highly professional national league. This cannot be achieved without adequate financial support. It is hoped that the Kenyan authorities will sort out the sponsorship problems bothering the league so that it can get back on its feet and start running smoothly again.