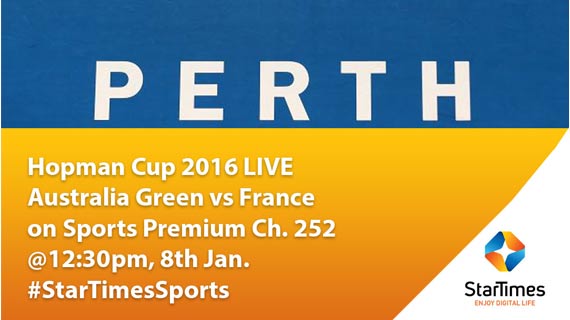 With the world of tennis gearing up for the first Grand Slam of the year, the Australian Open, which begins on January 18th, the Down Under country has been abuzz with its own summer of tennis tournaments.

Already the Hopman Cup is well underway, with Ukraine facing Australia Green in the final on January 9th, 2016, at the Perth Arena, Perth.

No worry for Tennis lovers because after StarTimes broadcast all 39 matches of the Hopman Cup, live from Perth from Sunday 3rd January to Saturday 9th January 2016, more  front row seat action will immediately follow with  Fast Tennis 4 on 11 January and the World Tennis Cup on 12th, 13th and 14th January 2016

With the Hopman Cup coming to an end, Sydney will be the next port of call on January 11th, 2016. The Allphones Arena will present tennis’ equivalent of cricket’s Twenty20, as Australia take on the World in the Fast4 Tennis tournament. The exhibition matches will see Aussies Hewitt, Kyrgios and legend Pat Cash taking on 14-time Grand Slam champion, Rafael Nadal, Frenchman Gael Monfils and Swedish legend and another former world No. 1, Mats Wilander.

The Fast4 Tennis format is quite interesting and does not entirely follow tennis’ traditional rules, in that, scoring is done per point, with the first player to reach four points winning the set, while the first player to reach four sets winning the game. This has earned the tournament great reviews, with the play being faster, more competitive, exciting and done over a short period of time.

One week to the Australian Open, Adelaide will play host to yet another exhibition tournament from January 12th to 14th, 2016, with the World Tennis Challenge seeing the likes of Wilander, two-time Grand Slam champion Hewitt and Mark Philippoussis facing Spaniards Fernando Verdasco and Aranta Sanchez-Vicario, and Goran Ivanisevic, Iva Majoli and Marin Cilic from Croatia, in a series of singles and doubles matches.