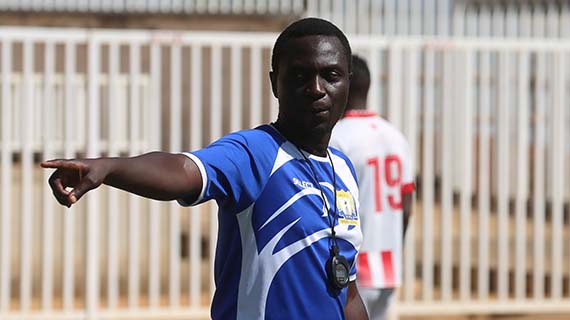 A pair of headers from defender Benjamin Oketch earned Kakamega Homeboyz a stunning 3-2 comeback win over Nzoia Sugar at the Bukhungu Stadium on Sunday to move to within four points of leaders Gor Mahia.

Peter Gin and Philip Muchuma had scored in either half to give the Bungoma based side a 2-0 lead. However, substitute Allan Wanga scored in the 83rd minute before Oketch grabbed all three with a late brace in the 88th and 95th.

Elsewhere, KCB saw their faint title hopes go up in flames after suffering a 2-1 loss at the hands of Bandari in Machakos. While the bankers dropped to fifth, the bankers continued in their revival with Johana Mwiti’s second half brace handing them points on the road.

KCB had their first chance of the game in the 17th minute but were denied by the woodwork when Mike Kibwage’s header came crushing under the crossbar after rising to connect to a corner.

Bandari were exciting in attack and they had a chance on the half hour mark when Bernard Odhiambo beat keeper Gabriel Andika to the ball off a William Wadri freekcik but his header went over the bar.

On the other end, Enock Agwanda came close with a ferocious left footed volley that was however collected by Bandari keeper Justin Ndikumana despite almost spilling it between his legs.

Four minutes later, Andika was called into a good save when he palmed away Danson Chetambe’s shot from the edge of the area. Off a counter attack, a minute later, Bandari came close but Mwita’s shot from Wadri’s square ball rolled wide.

In the second half though, it all exploded with Bandari hitting two in two minutes. Mwita broke the deadlock in the 59th minute with a left foot shot that rolled between Andika’s legs from the left after running to a brilliant defense splitting pass from Chetambe.

He doubled the tally just two minutes later when he ran behind the defense off a Collins Agade pass to beautifully lift the ball over the advancing Andika.

But the bankers struck back eight minutes later when Dennis Odhiambo halved the deficit with a low left footed shot inside the box after being teed up by Michael Mutinda inside the box.