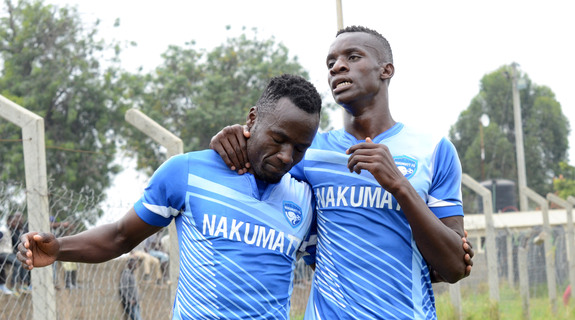 Nakumatt FC’s fight to avoid relegation got a massive boost with a huge 6-1 win over Kakamega Homeboyz at the Camp Toyoyo Ground on Sunday afternoon. Goalkeeper Lucas Indeche’s goal at the stroke of 90 minutes summed up a wonderful day for the shoppers.

Cornelius Juma stepped off the bench to score a brace adding on to goals from Kevin Thairu, Tom Adwar and Boniface Mukhekhe as Nakumatt moved to 12th in the standings with 23 points.

Mukhekhe gave Nakumatt a brilliant start scoring within the first minute of the game, powering a volley into the net after a clearance off a corner fell kindly on his path. The home side were 2-0 up after quarter of an hour when Adwak powered a header into the net from a Moses Odhiambo freekick.

Nakumatt had reaped benefits off their powerful start to the game and they kept possession neatly with Homeboyz left to chase shadows. Homeboyz though came alive momentarily and in the 28th minute Eston Esiye picked the ball off an error from Wanyonyi but his powerful shot was saved by Lucas Indeche.

They got the much needed goal four minutes later when Andrew Waisswa powered a header into the box from a Noah Wafula corner with the Nakumatt defense caught napping.

The goal aroused some fighting spirit from the visitors and they pressed more. Wafula had an effort in the 35th minute with a shot from range which was tipped over the bar for a corner by Indeche.

Just like they had started in the first half, Nakumatt scored within the opening minute of the half. Substitute Brian Nyakan who had come on for John Njoroge made an immediate impact delivering a cross from the left which was headed home by Thairu.

Wafula almost made a response on the other end for Homeboyz in the 52nd minute but his shot from the right was punched away by Indeche. But Nakumatt were wheeling away again in the 67th minute, when Nyakan picked a through pass before beating Wanyika one on one.

He completed his brace five minutes later in the same fashion this time running into a Thairu through pass before shooting low past Wanyika.

Indeche however left the best for last, striking a shot from almost 80 metres away catching keeper Wanyika off guard as he was off his line.