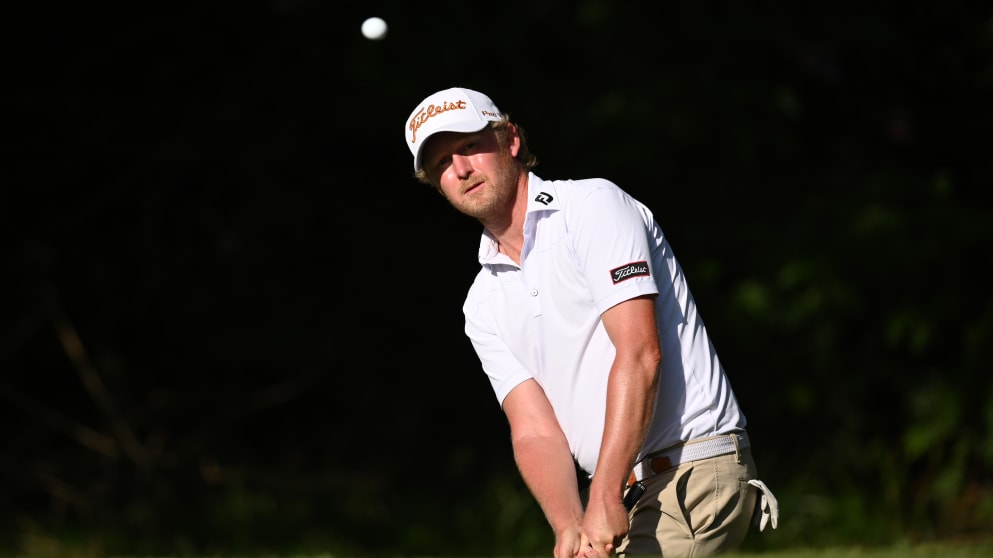 South African Justin Harding stormed back to the top of the leaderboard on the penultimate day of the Savannah Classic at the Karen Country Club on Thursday 25 March 2021. Harding, who won the Magical Kenya Open at the same venue last week took a three shot lead after shooting a brilliant five under par 66.

Harding had a slow start to the day, dropping a shot on the opening hole before bogeying on the 4th hole after consecutive birdies on the 2nd and 3rd holes to fall two shots behind the leader. A bogey on the 14th saw him drop to second before he switched on the turbo to birdie three of the last holes as his pursuers struggled, a fete that took him to -17 gross.

Kristoffer got off to a blistering start sinking eight birdies in the opening 11 holes to seize the leadership from Van Tonder. Calamity struck thereafter as the 23 year old Norwegian pro carded two bogeys and a double bogey to lose sight of the leaders.

After picking three birdies in the opening 12 holes, round two runner up David Drysdale was enjoying a share of the lead at -15 gross until the 15th hole where he dropped two shots in succession before picking another birdie at the 18th to remain three shots behind as he strives to break the South African domination.

Another South African Darren Fichardt stayed in contention, albeit three shots back, after a three under par 68 round left him within touching distance of the leader. An exquisite birdie chip on the 16th hole saw Fichardt briefly share leadership with compatriot Harding before dropping two shots on the back nine for -14 gross.

It was a bad day in office for David Wakhu who dropped 47 places on the leaderboard largely let down by poor approach coupled with lack of a killer instinct on the green. After a bright start on the front nine where a bogey at the eighth was sandwiched by two birdies on the sixth and ninth, Wakhu failed to navigate the back nine safely. After a routine birdie on the short par 5 12th hole, wheels came off on the notorious 13th hole where he dropped a shot after finding the left side bunker on approach. Things went from bad to worse for the Golf Park player, the only Kenyan to make the cut, when he dropped two shots in a horror display on the 15th and 16th before going for a much deserved break after a messy double bogey on the 18th hole.

Curtains will come down tomorrow as Harding chases an unprecedented back to back titles on the European Tour, well positioned to break the -21 winners’ record score he set at Karen last week. The action will be broadcasted live on DStv from 12.30pm on Channel 233.