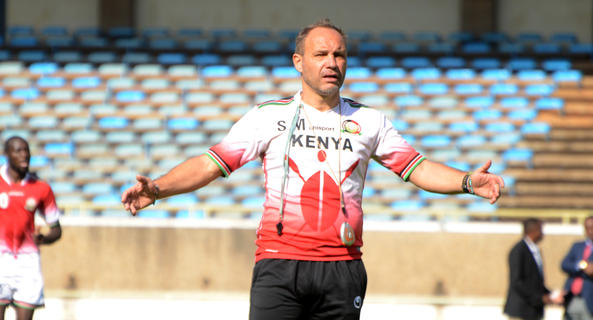 Sebastien Migne’s 15 month reign as the Harambee Stars coach has come to an end after he was asked to leave by the Federation and his departure agreed on mutually, with a severance package agreed upon for the termination of his contract.

In a statement released by the federation on Monday evening, FKF says they will immediately embark on the process of hiring a new technical bench before Stars gets into the 2021 Cup of Nations qualifiers in November.

“The federation wishes to thank Coach Migné for his exemplary work and high standard of professionalism during his tenure, which culminated in the country qualifying for the 2019 AFCON tournament for the first time in 15 years,” a statement from the Federation read.

It added; “The reorganization and appointment process for a new technical bench is already underway and the team to steer the Harambee Stars forward will be announced shortly.”

The Frenchman was appointed as the Harambee Stars boss in May 2018 and his contract was supposed to run till after the 2021 Cup of Nations. He took over from Stanley Okumbi who had been axed just a few weeks earlier.

Migne’s tenure came increasingly under fire after Kenya’s loss to Tanzania in the CHAN 2020 qualifiers two weeks ago.