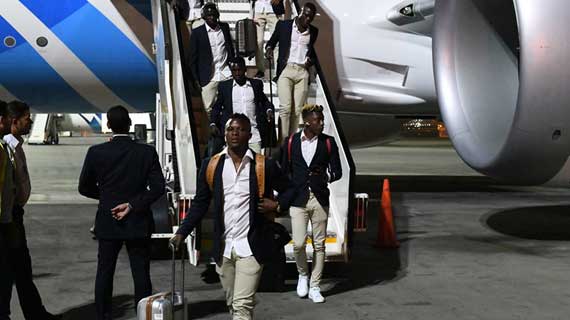 Kenya soccer team Harambee Stars has officially landed in the Egyptian Capital Cairo ahead of the AFCON Kick off.

Kenya soccer team players disembark from the plane in Cairo

Kenya soccer team Harambee Stars has officially landed in Cairo Egypt ahead of the Africa Cup of Nations Kick off.

The squad landed in Cairo shortly after 10:00 PM aboard Egypt Air direct from Paris, France.

The team enjoyed a 19 day training camp in France where they played two friendly match against Madagascar and DR Congo (In Madrid Spain) making this experience one of the best for a national soccer team in Kenya's History.

This will be Kenya's first tournament since 2004 in a new  calendar that sees the tournament moved from January to June. It will also be the first time the tournament will have 24 teams up from the previous sixteen.

To qualify for the finals , Kenya finished in second position of Group F  behind Black Stars of Ghana.

Burundi, Madagascar and Mauritania will be making their debut appearance at the tournament.