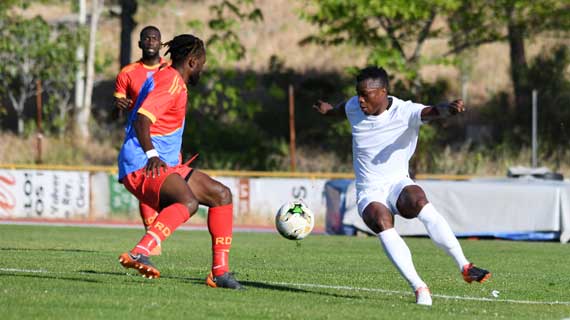 Kenya's national soccer team Harambee Stars settled for a 1-1 draw with Democratic Republic of Congo’s The Leopards  in their final friendly match played at the Estadio de Santa Ana in Madrid, Spain on Saturday evening.

Micheal Olunga put Kenya on the driving seat in the 25th minute with a nice left foot shoot past the keeper after a feed by the impressive Ayub Timbe who had done well to beat two DR Congo defenders.

Kenya were the better side in the first half with solid defending preventing The Leopards from making the final touch.

In the 48th minute, keeper Patrick Matasi brought down DR Congo’s Paul-José M'Poku but redeemed himself by saving the resultant penalty.

Micheal Olunga had a chance to double the lead but fluffed two open chances as the game passed the one-hour mark.

DR Congo equalized in the 86th minute via a low free kick shot by Arthur Masuaku  that Matasi seemed to have hold of but somehow the ball slipped into the net, a howler he would love to quickly forget.

Both coaches introduced several players in the second half perhaps to fine tune their combination ahead of Africa’s premier soccer extravaganza.

Kenya beat Madagascar 1-0 in the first pre-AFCON friendly played on Friday last week and will head to Egypt heads high after one of the best pre-tournament preparations ever.

Harambee Stars is pooled alongside Senegal , Algeria and neighbors Tanzania who are making a return at this competition for the first time in 39 years in pool C. Kenya's Matches shall be played at the Air Defense Stadium in Cairo.

Kenya will start its AFCON campaign against Algeria at the June 30th Stadium in Cairo on June 23 before facing Tanzania four days later. They will conclude the group phase matches against Senegal on July 1.

This will be Kenya's first tournament since 2004 in a new calendar that sees the tournament moved from January to June. It will also be the first time the tournament will have 24 teams up from the previous sixteen.