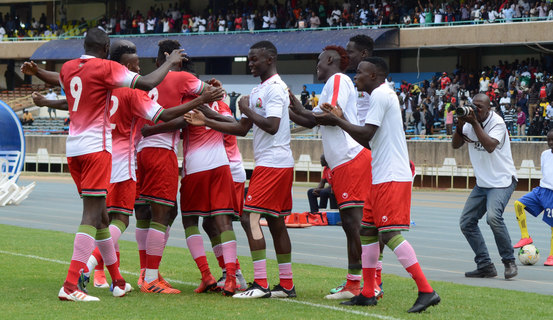 Francis Kahata slid home a 76th minute goal as Harambee Stars continued with their winning run beating visiting Malawi 1-0 in a friendly match at the Kasarani Stadium on Tuesday evening. This was another shot in the arm for head coach Sebastien Migne coming two days after picking a historic 1-0 win over Ghana in a 2019 AFCON qualifier.

The win is now set to see Kenya rise in the next FIFA ranking release, especially after that win against Ghana.

Migne fielded the same team that played against Ghana, making only two changes forced through injury. Right back Philemon Otieno who came off in the second half against Ghana paved way for Jockins Atudo while striker Michael Olunga was out for Jesse Were.

Olunga had been slotted to start and even warmed up with the rest of the players, but pulled out after aggravating a knock he picked up in the Ghana game.

With fatigue still weighing up their legs, the game was off to a slow start and the visitors had the first chance of the game after 10 minutes when Gerald Phiri’s curling freekick from range went wide.

Kenya’s first chance came after 19 minutes but it was one out of nothing, midfielder Eric Johannah citing the Malawian keeper off his line from midfield, but his ambitious shot was far off target. This came just a minute after Aboud Omar’s shot from the left went wide.

The visitors were thwarted with a brilliant save by Kenya keeper Patrick Matasi who went down low on the left to parry away a Richard Mbulu connection off a dicey John Banda cross from the right.

Kenya made changes at the start of the second half with the fresh legs of Piston Mutamba and Erick Ouma coming on for Jesse Were and Ovellah Ochieng respectively.

Ouma’s introduction was a game changer for Kenya as he brought in pace and supply off the wings, making Kenya more dangerous. Migne made more changes, midfielder Ismail Gonzalez paving way for Anthony Akumu in midfield.

Kenya looked fresher, were more incisive and posed more danger. Ouma should have had a goal himself when he rose in well at the edge of the six yard box to connect to a Jockins Atudo cross, but his header went just wide.

But he turned provider later, laying a low cross into the area that was poorly defended and Kahata was there to poke the loose ball home.

Malawi pressured in the final quarter of an hour, but they could not get a goal back. They came close with Gabadinho Mhanga racing into the box, but defender Joash Onyango pulled a brilliant sliding tackle to block.

The visitors also thought they should have had a penalty late on when a Kenyan defender blocked a shot with his arm, but referee Israel Mpaima waved play on.