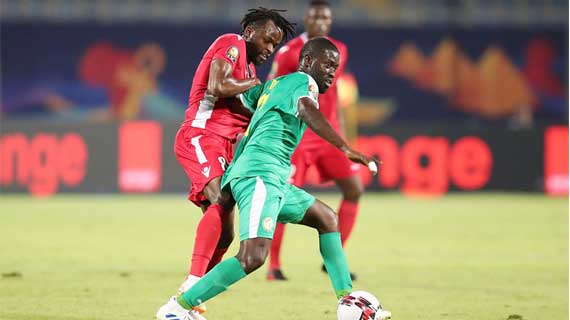 Kenya's Harambee Stars lost to Senegal 3-0 in their final Group C match in Cairo and will now wait for the final group matches to know their progress fate.

Harambee Stars on Monday night lost their second match at teh Africa Cup of Nations falling to Africa's top ranked nation Senegal in their final group C match at the June 30th stadium in Cairo.

The Kenyan side needed at least a draw to be guaranteed proper qualification to the next round with four points but the loss prolonged the wait for the Stars who will now depend on other matches' mathematics  to know their progress fate.

It all seemed to be going according to script  for the Migne led boys as they held on to a 0-0 draw by halftime with a solid performance.

Keeper Patrick Matasi was on form in the half with three amazing saves stopping Champions League winner Sadie Manne's penalty.

The script was all different for Stars in the second half as they allowed in three goals , one from Ismailia Sarr in the 63rd minute when he pounced on a loose ball in the 18 yard area with Matasi  well stretched out of his position as he followed and missed an incoming  cross from the right flank.

Mane would then redeem himself with a second for the Teranga Lions taking advantage of a defensive slip up by Musa Mohhammed to burrow in the second.

Stars'  hopes were further dimmed when defender Philemon Otieno was sent off for a second yellow card after tripping Ismailia Sarr in the box, gifting Mane another chance to redeem himself from the spot , this time putting it hard past Matasi for a 3-0 win for the Lions.

The loss saw Kenya finish third in Group C with three points from their win against Tanzania's Taifa Stars and will now wait for the final round of matches to know their fate on Tuesday .

In another group C match played at the same time  in Cairo, Tanzania lost 3-0 to Algeria to finish the tournament at the bottom of group C with nil point.