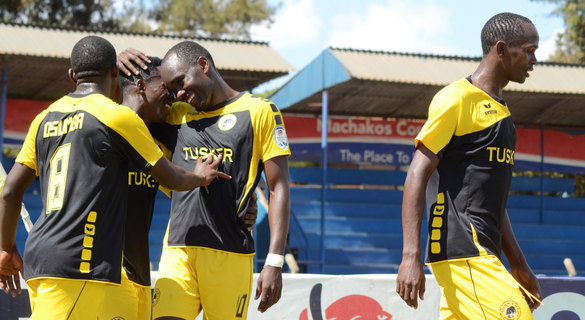 Ingwe's hopes of finishing third up in smokes

AFC Leopards’ downward spiral in the final weeks of the season continued on Wednesday when they were thumped 4-0 by Tusker FC at the Kenyatta Stadium in Machakos on Wednesday evening. The loss comes barely three days after the side lost 1-0 to Sofapaka in the semi-finals of the FKF Shield.

Pressure now mounts on coach Rodolfo Zapata with the few fans who watched the appaling display in Machakos on Wednesday baying for his blood.

Tusker who have lost only thrice to AFC over 23 meetings had the better of starts in the game with an attacking minded display and had Boniface Muchiri’s early shot blocked inside the box while Peter Nzuki’s volley from the rebound was over.

AFC came close after 13 minutes with a freekick off the left by Duncan Otieno, but keeper Patrick Matasi, a former AFC man turned the ball behind for a corner. They had another great chance in the 20th minute when Ezekiel Odera knocked down the ball for Brian Marita, but Matasi easily saved the shot.

They were punished immediately for the missed chance, Sidney Ochieng breaking the deadlock much thanks to poor decision making from keeper Ezekiel Owade. Brian Osumba’s shot was deflected high inside the box and the keeper failed to go for the ball, Ochieng arriving and tapping it beyond him.

The goal upped Tusker’s confidence and seven minutes later, Timothy Otieno had a great chance after being fed off on the right by Muchiri, but his shot was saved by Owade.

AFC would eventually cave into the pressure in the 42nd minute through a brilliant goal taken by marlon Tangauzi. The right back wheeled away on the right before slamming a shot that left Owade dazed.

AFC tried to come back in the second half with Brian Marita coming off for Christopher Oruchum while Edward Seda was also subbed off for Eugene Mukangula. Later on Nabwire was also hauled out for Saad Musa.

Nonetheless, it was Tusker who had the last laugh with two goals within two minutes in the final 15 minutes of the game.

Muchiri made it three with a cool calm and composed finish inside the box while Macharia scored in similar fashion after fellow substitute Mike Khamati had won the ball off Salim Abdallah.