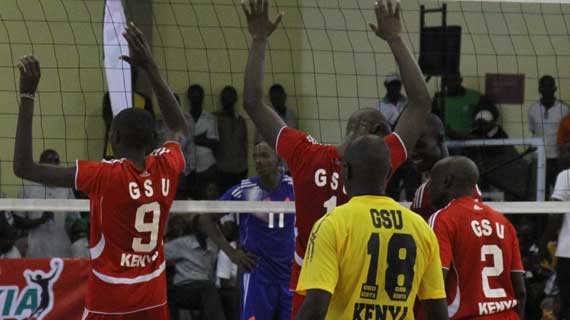 GSU Men volleyball team have their eyes on the podium as they depart for Cairo ahead of the Africa men club championships.

This, captain David Kirwa Kebenei notes will help the Kenyan champions improve their game and performance in the championships that will run between April 1st and 8th.

GSU will come face-to-face with Zamalek, Suez Canal and Smouha in friendly matches before commencing their title hunt.

The veteran opposite hitter said the para military outfit who boast of 13 league trophies in their cabinet are eyeing at least the semis this year. In the 2018 edition, the team, tutored by head coach Gideon Tarus, his assistants Dunson Tali and Dennis Opiyo under the leadership of technical director Moses Epoloto guided GSU to a fifth place finish.

"Our preparation this year has been better and extensively adequate and I am positive we will win the title in Cairo. We face fierce competition at the continental stage  hence we undertook to working on our mistakes from the 2018 Championships year-round at both individual and team levels  as we position ourselves for victory," said Kirwa.

The police team leaves the country on Wednesday evening for Egypt with a delegation of 21 including 14 players. Benjamin Logo is the head of delegation as other officials are Gabriel Metkei the team physiotherapist, Nicodemus Onsongo (already in Egypt) and team manager Nicholas Kimeli.