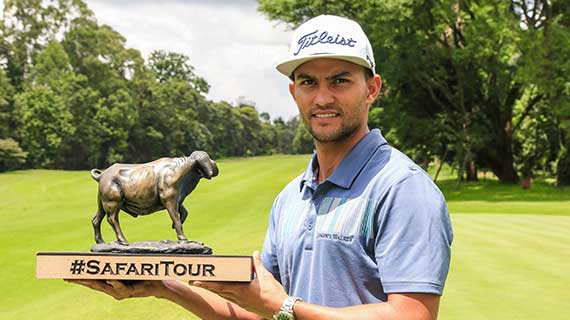 Greg Snow  posted a 2-under par 70 score on the final day of the Sigona Golf Club leg of the 2019/2020 Safari Tour Golf Series to take his tournament total to 8-under par 280; four shots clear of his nearest challenger to emerge winner of the Sigona event.

The outstanding performance at Sigona saw Snow make history as the first player to record a hattrick of consecutive Safari Tour wins (Muthaiga, Thika Greens and Sigona); leaving him in a league of his own as the only golfer to record four Safari Tour victories in a season.

Snow now leads the Road to the 2020 Kenya Open ranking with 350 points, having dislodged Dismas Indiza (347 points), and says that he has no intention of letting go of the top position.

“My goal is to win the order of merit like I did last year. There are still two more events to go, being at the top feels good staying up there is a different story all together. I am pleased though that’s where I intend to stay. I am therefore looking forward to the next two events, and I have got to keep doing what I am doing by staying focused,” he said after being crowned Sigona Golf Club champion.

He said that he was happy with his performance at the event, adding that the wet conditions played to his strengths.

“I am satisfied with my performance this week as my game is heading in the right direction. My length off the tee in the wet conditions gave me an advantage as I knew if I drove the ball well off the tee, scoring was not going to be an issue,” he said.

Zimbabwean, Robson Chinhoi, finished four shots behind Snow having posted an impressive 2-under par 70 score to take his total for the tournament to 4-under par 284. His performance at this event marks his best outing at this season of the Safari Tour; having only played in four events, and his highest finish being fourth at the Great Rift Valley and Golf Resort outing.

He had a tricky first nine; carding a total of 37 courtesy of a double-bogey at the par-5 fourth and having only made a lone birdie at the par-4 seventh. The back nine proved more responsive, where he played blemish-free and picked up birdies at the 10th, 14th and 15th to card a total of 33. For his stellar outing, he took home KShs 100,000.

Royal Nairobi Golf Club’s Erick Ooko completed the podium places having played a 2-over par 74 round to take his total for the event to 1-over par 289; taking home KShs 56,000. Windor’s Riz Charania finished in solitary fourth while John Karicu and Simon Ngige ended their campaign tied in fifth.

Mutahi Kibugu, who was the only amateur to make the cut at the event, took home the Silver Salver, having finished tied in ninth alongside Tony Omuli.

The Safari Tour is back in action at the Kitante Open in Uganda from the 12th to 15th of February 2020 for the penultimate event on the calendar.