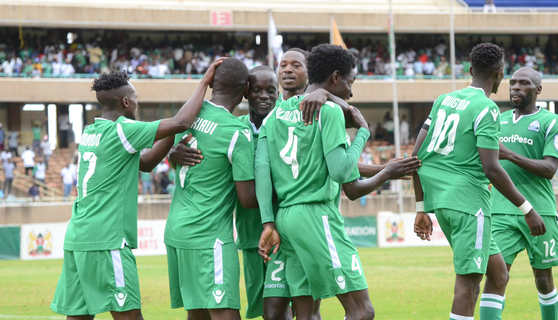 Easy win for Gor Mahi who trounced Aigle Noir, to step into CAF CL first round

Gor Mahia progressed to the CAF Champions League first round for a third year running after trouncing Burundian side Aigle Noir 5-1 at the Kasarani Stadium on Sunday. The two sides had drawn 0-0 in the first leg played in Bujumbura two weeks ago, and Gor ensured no mistakes were made at home as they won comfortably.

Nicholas Kipkurui struck twice in the opening stanza for Gor after an own goal by Hamza Hitimana had set Gor on, handing them a 3-0 half time lead. New signing Dickson Ambundo and Boniface Omondi scored in the second half with Benjamin Gasongo scoring Aigle Noir’s consolation late on.

It was clear from the first whistle that Gor were interested in killing the game early as they attacked with intent. It took them just eight minutes to break the deadlock when Hitimana turned the ball into his own net as he tried to cut out a Kenneth Muguna cross.

Just before that, Gor had a clean chance when the Aigle Noir keeper had punched a cross into Boniface Omondi’s path off his line, but the diminutive winger took too many touches on the ball instead of hitting it into an empty net.

However, Gor stretched their lead in the 17th minute with Kipkurui nodding home his first of two with a powerful header after running behind the defense to meet a Lawrence Juma cross. The visitors were disoriented by the second goal and the coach had to make a hasty substitution after 29 minutes, Akonkwa Akimana coming off for Seidou Keita.

But that did not help his course as the home side stretched their lead to 3-0 after 37 minutes when Kipkurui completed his brace. The Aigle Noir defense had struggled to clear a cross and Omondi nodded the ball down for Kipkurui to tap home.

Their only shot at goal in the first half came just three minutes after Gor had scored when Aime Christian Kanyamuneza went for an effort from distance but keeper David Mapigano thwarted the danger with a full stretch save.

In the second half, Gor piled in more steam forcing the Burundians to play deep in their half. They made it 4-0 in the 63rd minute when Ambundo volleyed home after the keeper spilled a cross from Omondi. Ambundo then turned provider to put Omondi through with a beauty of a backheel before the latter shot low into the net.

Gor were punished after they began being complacent passing the ball around the park like an evening of training. Gasongo pounced on a weak backpass before shooting low past the keeper.