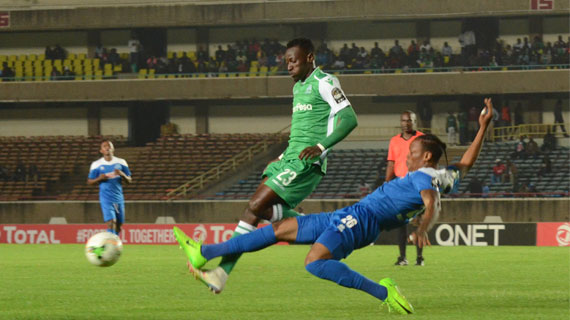 Gor Mahia’s hopes of qualifying to the Quarter Finals of the CAF Confederations Cup quarter finals suffered a massive blow after losing 2-1 at home to Rwanda’s Rayon Sport on Sunday. Coming into the game Gor needed juts point to assure themselves of qualification but couldn’t get the job done.

Gor remained top of the group after USM Alger lost 2-1 away to Yanga in Tanzania and they will now have to beat the North Africans in Algiers on August 29 to qualify. A point might sail them through if Rayon drop points or fail to beat Yanga by a big margin.

Gor had come from behind with Mustafa Francis cancelling out Bonfilscaleb Bimenyimana’s early goal, but were left to lick their wounds after Eric Rutanga scored the winner with a sublime freekick.

Bimenyimana broke the deadlock after just two minutes on the clock when he slid in inside the box to tap home a low cross from Djabel Manishimwe. Bimenyimana almost struck a second on the quarter hour mark when he rushed on to a long ball from keeper Abouba Bashunga, but Gor keeper Shabaan Odhoji was off his line to block.

The danger man once again came to the fore of a Rayon attack in the 18th minute when he was sent through by Francois Mugisha, but his shot from the edge of the box went wide.

K'Ogalo took themselves back into the game after 23 minutes when Francis Mustafa shielded away a challenge from Abdoul Rwatubyaye before gliding a shot past the keeper having rushed to a Jack Tuyisenge through pass.

The goal seemed to have awoken Gor’s fight as they played better.

But, the weak defense line was almost exposed again when Ange Mutsinzi picked up a cross that fizzled across the face of goal from the right but his shot was blocked by Onyango before keeper Odhoji picked up.

After the break, Gor started brighter but were stunned 10 minutes in when Rutanga struck a curling freekick from the right, dipping at the back post with keeper Odhoji well beaten.

The tide of confidence now swung Rayon’s way as the Rwandese champions dictated the tempo and created more of the chances.

Kerr rung in the changes, Ochieng brought off from his nightmare evening at right back and in came Lawrence Juma. The change saw a tilt in formation as Gor went three at the back in search of a goal.

The home side piled the pressure and would have won the game in added time but Mieno’s shot from inside the box was blocked on the line.