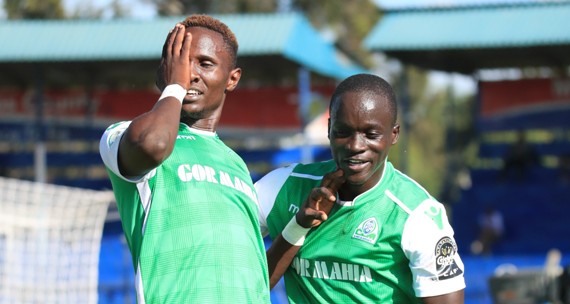 Gor Mahia have opened a four-point gap on top of the Kenyan premier League after thrashing Nzoia Sugar 3-0 in Machakos on Sunday, going to 44 points with second placed Kakamega Homeboyz dropping two points after being held to a 1-1 draw by struggling Wazito FC.

Balinya scored his first in the 42nd minute when he reacted fastest to pounce on a loose ball when keeper Mangala spilled a shot from Samuel Onyango.

In the second half Nzoia had very good chances to score but couldn’t finish. Just 50 seconds in, Felicien Okanda was sent through on goal but his shot was timid, keeper David Mapigano collecting easy.

In the 57th minute, a freekick from the left fell kindly on Kevin Juma at the backpost, but he failed to guide it into the net with the goalmouth at his mercy.

Those missed chances would come to haunt them as Gor doubled their tally, with Balinya earning his second in the 63rd minute when he tapped home a cross from Onyango after he had been put through by a defense splitting pass from Muguna.

K’Ogalo went 3-0 up after another mistake from keeper Mangala when what looked like a timid shot from Clifton Miheso bounced off his arms and Muguna pounced to tap home.

Meanwhile at the Afraha Stadium in Nakuru, new signing Elvis Rupia scored on his first match for Leopards as he tapped home in extra time, Ingwe beating Ulinzi Stars 1-0. The soldiers were reduced to 10 men after midfielder Boniface Onyango was sent off for a second yellow.

At the Kasarani Stadium in Nairobi, Kariobangi Sharks were in eight heaven as they picked up their biggest win in top flight, beating struggling Kisumu All Stars 8-1.

Ugandan peter Lwasa, signed this month from Sofapaka scored a brace with an own goal adding on to strikes from defender John Kuol, John Mazembe, Patrick Otieno, Kevintom Machika and Patillah Omoto as Sharks moved further away from the red zone.