Gor maul Sharks to extend lead at the summit 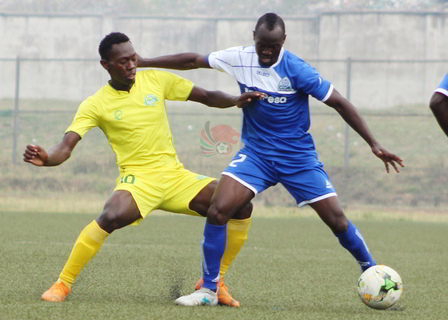 An Own goal, and two goals from Kevin Omondi and Lawrence Juma ensured Gor Mahia returned to KPL action with an emphatic 3-0 win over Kariobangi Sharks

Gor Mahia beat Kariobangi Sharks 3-0 at the Moi Stadium Kisumu to widen the lead to 15 points at the helm of the Kenya Premier League on Wednesday afternoon.

An own goal and two goals from Kevin Omondi and Lawrence Juma ensured that Gor Mahia extended the lead at the summit.

The league leaders mauled Kariobangi Sharks 3-0 at the Kisumu's Moi Stadium to seal their spot at the top of the log with 55 points out of the 21 matches they have played this season.

K'Ogalo's intent was clear right from the beginning of the 3 pm kick-off, extending their unbeaten run in the league while ensuring the Sharks lost their fourth successive match against them in the last two seasons.

The 3-0 win opened a 15 point gap between the defending champions and their closest rivals, Sofapaka who are now occupying the second spot on 40 points after 24 games. K'Ogalo have played three matches less.

Gor Mahia took a lead in the first half after Sharks' Geoffrey Shiveka redirected a Francis Kahata drive into his own net in the 25th minute. Second half substitute Kevin Omondi extended the lead in the second spell(77') before Lawrence Juma sealed the 3-0 victory with an injury-time goal (86').

Kariobangi Sharks are still waiting to take a win from the defending champions and in the process have soaked in 12 goals against only three in the league.

This was Gor's first game in an August month that is packed with two CAF confederations cup assignments and eight league matches.