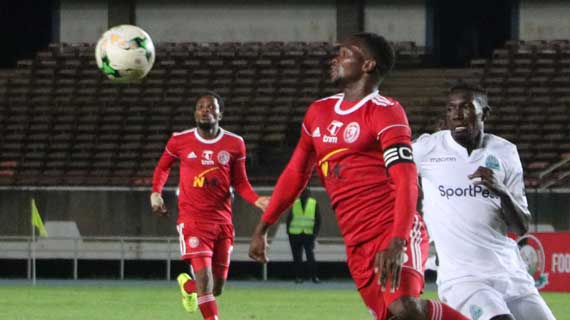 Gor Mahia’s CAF Champions League campaign started on a good footing winning 1-0 against Malawi’s Nyasa Big Bullets in the first leg of the preliminary round played at Kasarani on Wednesday night.

Gor needed a stoppage time winner from second half substitute Bernard Ondiek to peel through the slim win.

With the result, Gor only needs to avoid defeat in the second leg in Lilongwe next week to sail through to the second round. A 2-1 loss at worst will also take them through into the next round on the count of away goals rule.

Gor had a slow start to the match, especially having had little pre-season time as well as rest for the players. They found themselves deeper into problems after 12 minutes when striker Jack Tuyisenge had to go out injured and was replaced by Sameuel Onyango.

The home side despite the slow start had their first chance at goal on the quarter hour mark when skipper Harun Shakava volleyed over from the edge of the six yard box from Shafik Batambuze’s corner.

In the 32nd minute, the visitors had their first effort at goal, though as a half chance, when McPhallen Ngwira let off a shot from distance but it deflected off Shakava’s back and went behind for a corner.

Three minutes to the break, Kenneth Muguna took on a run from the left cutting in but his eventual shot did not trouble the keeper as it sailed wide.

A minute to halftime, Gor should have gone into the lead when Muguna’s chip from the edge of the area found new boy Erisa Ssekisambu, but the Ugandan saw his header saved by the keeper.

In the second half, Gor stepped up and thought they had scored after eight minutes when Onyango buried home from the six yard box off a Muguna freekick but the second assistant referee flagged down the goal for offside.

Ten minutes later, they had another chance when Odhiambo was teed up by Humphrey Mieno on the right but his eventual low shot went just wide off target.

Gor kept the pressure and had another chance with quarter of an hour left when Onyango tried to rifle a shot from distance but it went straight into the goalkeeper’s palms.

The pressure finally bore fruit in added time when Ondiek who had come on for the injured Muguna thumped the ball home from the edge of the six yard box after Mieno had unconventionally taken the ball into his direction with his thigh.