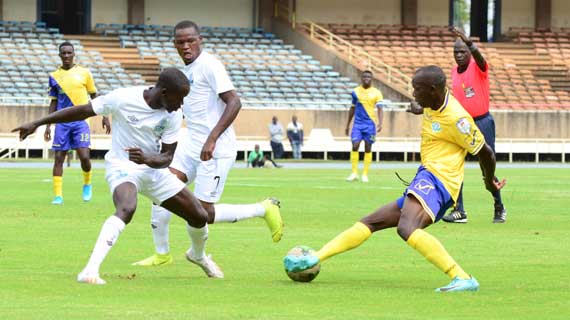 Tusker FC’s title credentials suffered a massive blow on Saturday after being held to a 2-2 draw by struggling Kisumu All Stars at the Moi Stadium with another late equalizer. The brewers have now dropped four points in two matches from winning positions and are eight points behind the leaders Gor Mahia who won 3-2 at home against Western Stima in Nairobi.

Timothy Otieno had looked set to have given Tusker maximum points on the road, but once again, a lapse in concentration saw Billy Agai score the equalizer with virtually the last kick of the game.

Tusker are now on 43 points with Homeboyz a point above them, though the Kakamega based side could reduce the gap to just four if they win at home against Nzoia Sugar on Sunday.

In Nairobi, Gor Mahia looked well on course to hand a thrashing to Western Stima, but they made it difficult with the power men almost snatching a point.

Boniface Omondi, Kenneth Muguna and Nicholas Kipkurui had given Gor a comfortable 3-0 lead within the opening 13 minutes of the game. Baron Jobita then scored one for Stima before half time while youngster Benson Omala scored the second in the final 45.

Gor started the tie on top and needed three minutes for Omondi to break the deadlock with a low finish inside the box. Muguna then made it 2-0 with a rifled shot from the edge of the area that took a deflection to land in the bottom right.

Gor were 3-0 up after 13 minutes thanks to a massive blunder from Stima keeper John Njau whose hospital pass inside the box went straight to Lawrence Juma who in turn teed up Kipkurui for a simple finish.

Stima fought back and pulled one back three minutes to half time when Jobita scored from the spot after Elvis Ronack had hacked down Omala inside the box. Stima were better in the second half and the introduction of Stephen Onyango added them some spice in attack.

They scored their second few minutes after the restart when Omala ran onto the ball after keeper Fredrick Odhiambo spilled a shot from Onyango. The visitors piled pressure for an equalizer, but they came short