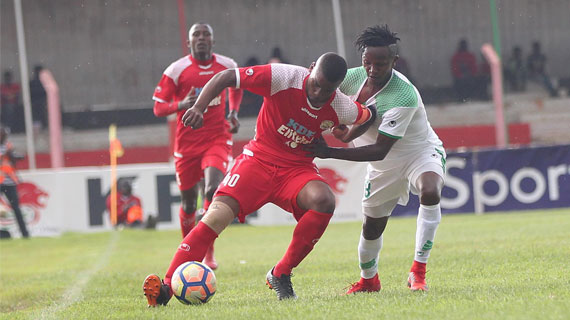 The home side had a strong start to the game with their top scorer Masita Masuta wasting  glorious opportunities while Daniel Waweru’s shot from range was well handled by Boniface Oluoch. They were duly punished for the misses when Kahata tapped home from George Odhiambo’s cross in the 12th minute.

Ulinzi came back after the break determined to get back level and Elvis Nandwa had a chance with a shot from inside the box which went wide while Mohammed Hassan saw an effort come off the bar.

Again, the soldiers dominated but were punished later on when Tuyisenge tapped the ball home from a Boniface Omondi corner.

Meanwhile, Tusker FC progressed to the FKF Shield round of 16 with a come from behind 2-1 win over Bandari FC in Mombasa. 2017 finalists Kariobangi Sharks also went through to the round of 16 with a 4-2 win in post-match penalties over fellow Premier league side Wazito.

The match ended 2-2 in regulation time. Derrick Onyango marked his debut for Wazito with a goal that was cancelled out by a Hillary Otieno header in the second half. Sanneh Ebrima would then put Sharks in the lead, but a goal in stoppage time by captain Oliver Kilonzo forced the match into post-match penalties.

In the early kick off, Leysa FC upset National Super League side KCB 2-1 to make a maiden appearance in the round of 16. Dennis Maina’s goal gave Leysa a half time lead, but a second-half fight back by the NSL side saw Harry Gentle score an own goal in the dying minutes of the match.

However,  Justus Anene sent a powerful drive past Juma Mpongo in the KCB goal deep in stoppage time to give the underdogs passage into the next round. Mwatate United, meanwhile, will grace the round of 16 after Ushuru failed to turn up for the match.

In Kericho, KPL side Posta Rangers went through to the next round after a 1-0 win over Division One side Kisumu Hotstars.