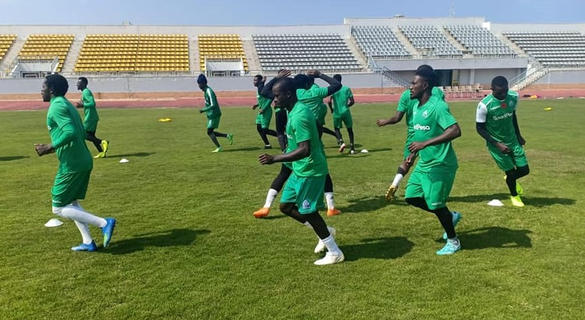 Kenyan champions Gor Mahia landed in Cairo, Egypt on Tuesday night ahead of next Sunday’s crucial CAF Confederations Cup tie against hosts Zamalek in Alexandria as the club looks to inch closer to a quarter final slot.

Gor travelled straight from Algiers, Algeria after their fourth group match against NA Hussein Dey last Sunday and the club which sits second in Group D must avoid defeat against the Egyptian giants to keep their quarters dream alive.

K’Ogalo lost 1-0 to the Algerians in controversial circumstances after their equalizing goal on the hour mark was cancelled by the referee. With the result, Gor dropped to second in the group with six points, one behind Hussein Dey and one ahead of this placed Zamalek.

Avoiding defeat to Zamalek who they beat 4-2 in Nairobi on match day one and at worse Hussein Dey beat Petro Atletico of Angola in the other group match will give K’Ogalo hopes of qualification to the group stages.

The Kenyan champions face off with Petro in the final group stage match later this month but the Zamalek tie will be crucial in giving them direction as far as the group is concerned.

Meanwhile Football Kenya Federation has written a complaint to CAF to protest the poor officiating of the match between Gor Mahia and Hussein Dey.

FKF CEO Robert Muthomi in a letter to CAF points out that Referee Mr Traore  “fell a long way short of the stadard that should have been considered acceptable."