Gor Mahia a point away from title 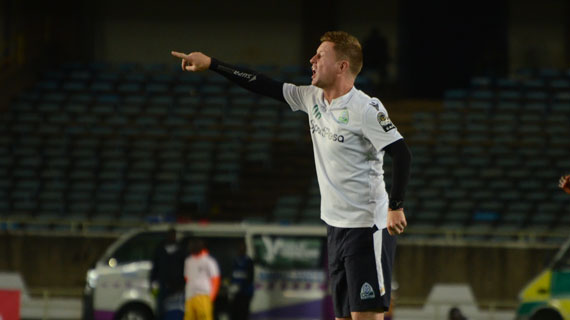 Gor Mahia are one point away from securing a record 17th Kenyan Premier League title after hitting Sofapaka 3-0 at the Narok Stadium on Wednesday evening. Gor’s second string side scored three unanswered goals past Sofapaka’s first team who had keeper Wycliffe Kasaya sent off on the hour mark.

The win in Narok takes Gor to 68 points, 20 ahead of second placed Bandari with seven matches to go. A loss at the hands of AFC who are also on 48 points will not deter their quest but only delay their journey.

“I am happy with the performance today. I get criticized a lot especially on my team selection but I want to hear what them people will say after this performance today. We were absolutely superb,” Gor Mahia tactician Dylan Kerr said after the game.

Kerr made a complete change to the squad from the one that played in their 2-1 loss to Rayon Sport in the CAF Confederations Cup last Sunday. Only keeper Shabaan Odhoji and striker Francis Mustafa survived from tat team and both started from the bench.

Keeper Fredrick Odhiambo who was handed a starting role for the first time this season justified his start saving a 14th minute penalty that was probably a turning point for the game. The keeper bounced back after his error clipping Ezekiel Okare inside the box after confusion between him and Charles Momanyi.

The shot stopper sprung strongly to his left to palm away Kepha Aswani’s effort.

Gor’s second team was dominant in possession, Sofapaka chasing for most of the game. They went ahead four minutes to the break when defender Joachim Oluoch stretched a foot to tap in the ball after Kasaya’s save off a Samuel Onyango effort from a corner fell on his path.

Coming off the break, Sofapaka tried to change the tempo to equalize but their efforts suffered a massive blow from a Kasaya school boy blunder. The keeper pulled down Lawrence Juma inside the box after he failed to control a simple back pass and the ref awarded a penalty and sent off Kasaya.

Batoto ba Mungu had to sacrifice one player and out went Rwandese international Justin Mico for keeper Mathias Kigonya. The Ugandan’s first order of duty was to face Innocent Wafula’s penalty, and there wasn’t much he could do as the winger and captain of the day tucked the spot kick in.

Sofapaka were now chasing the game and even with the introduction of Stephen Waruru and Timothy Luda in attack, they could not get a goal back.

They suffered another massive blow when midfielder Mohammed Kilume limped off injured with a knee sprain and with all subs used, they had to play the final 10 minutes with nine men.

Onyango then put the icing on the cake for Gor with a sweet finish coming off the end of a beautiful team move, one two touches of the ball from deep in their half ending in Cercidy Okeyo putting the winger through.