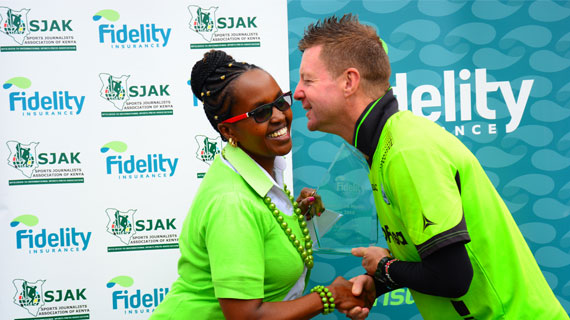 The Briton was unanimously voted by SJAK Football Commission after going unbeaten that month, winning all the five matches played scoring fifteen goals, and conceding only one to collect maximum points.

Kerr who was caught by surprise acknowledged the brilliant work being done by his backroom staff and his players in general.

“Honestly when I came here I did not know that it was me getting this award. I have to say thank you to the technical staff who have been amazing during this period. They have helped me a great deal, that is why we are here,” the coach said as he received his award on Tuesday morning.

“My players too have been amazing and I can’t take that away from them. No matter who is selected, they have done a brilliant job and that is why we are getting these results,” the tactician further added.

“We respected every opponent we faced in the month of June and all I can say is that teamwork and dedication helped us grind the results,” the coach said.

Kerr was nominated alongside Sofapaka tactician John Baraza but the Kogalo coach triumphed in a landslide vote carried out by football writers. His team is currently top of the log with 52 points from 20 matches.

This is Kerr’s second accolade as K’Ogalo coach, having picked his maiden award in September 2017.