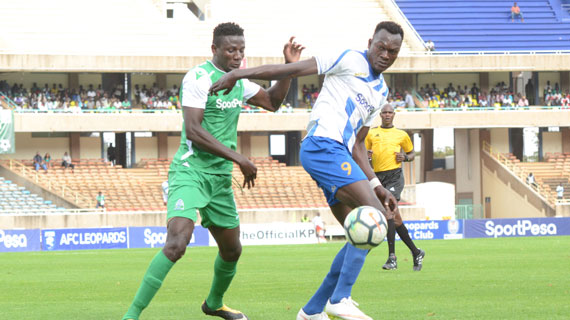 Despite a nine-minute stoppage due to crowd trouble, Gor Mahia held on to beat eternal rivals AFC Leopards 2-0 in the Mashemeji Derby on Sunday and clinch their 17th Kenyan Premier league title.

The game suffered a stoppage after Gor scored their second goal through Bernard Ondiek with a section of AFC fans throwing broken seats into the pitch protesting a foul on their player in the build up to the goal. The game stopped for nine minutes as stewards raced to calm down the fans.

AFC had gone ahead through man of the match Boniface Omondi before he laid up the second for Ondiek.

Gor needed just a win to clinch the title with their closest opponents Bandari being 20 points adrift. Gor started strong and came close on the quarter hour mark when Cersidy Okeyo’s freekick landed on Bernard Ondiek at the back post but his header was weak, straight into keeper Ezekiel Owade’s arms.

AFC almost got into the lead after 27 minutes when Wesley Onguso’s defensive header almost landed into his own net as he tried to clear out a cross, but the ball landed over the bar.

Four minutes later, Gor broke the deadlock, Omondi hitting the back of the net with a low shot from the edge of the box. The level of happiness should have gone same in the 37th minute, but AFC missed a great chance with Isaac Oduro’s freekick from a good scoring position went straight into the wall.

Two minutes later, they were punished.

Gor won the ball in midfield and Karim Nizigiyimana spread it wide on the other end to Omondi who cut into the box and sliced a pass back to Ondiek who took the simplest of finishes beating Owade one on one.

Almost at the break, AFC had a chance to draw back level from the penalty spot after Charles Momanyi handled inside the box but midfielder Whyvonne Isuza struck wide despite sending keeper Fredrick Odhiambo the wrong way.

In the second half, AFC came brighter with head coach Rodolfo Zapata making a double change bringing on Vincent Oburu and Eugene Mukangula for Baker Lukooya and Edward Seda.

Four minutes from the restart, Mukangula swung in a sweet looking cross after skipping away from Wesley Onguso on the left, but Isuza’s effort on the volley went over unmarked inside the box.

AFC’s Nigerian striker Alex Orotomal had two shots inside the box, but both shots were saved by keeper Odhiambo.