Gor, Yanga roll sleeves for do or die CAF tie 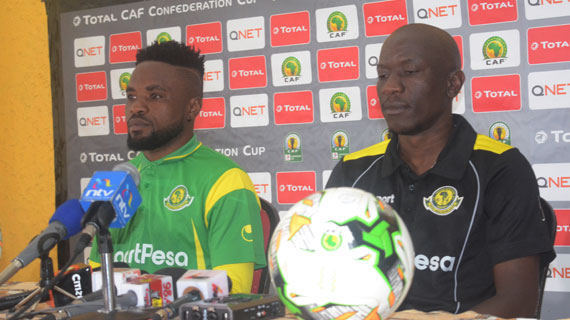 Gor Mahia will take on Tanzania's Yanga FC in a CAF Confederations Cup match this evening hoping for a win that could boost their chances of qualifying to the group stages.

For both hosts Gor Mahia and former Tanzanian champions Young Africans (Yanga),  Wednesday night’s CAF Confederations Cup Group D tie at the Moi International Sports Centre Kasarani in Nairobi will be a do or die fixture as far as their hopes of making it into the knockout stages is concerned.

Yanga are bottom of the group with a single point gained from their 0-0 draw at home against Rwanda’s Rayon Sport having lost their opening match 4-0 against group leaders USM Alger in Algeria. Gor are second in the group having picked back to back draws against Rayon and Alger.

For the Tanzanian side, a loss would all but diminish their hopes of making it into the knockout phases.

“We know very well that this is a very crucial match for us but we are ready for the game. We are well prepared and hopefully we get the win we have been looking for. We know Gor Mahia is a tough team and they are playing at home so it will not be a walk in the park,” assistant coach Juma Mensah said ahead of the tie.

His sentiments are shared by skipper Juma Abdul who notes they have taken the short trip down to Nairobi for nothing short of three points, noting their progression in the competition hugely hinges on the result they post in the game.

“We have come to Nairobi to pick three points. We understand that it is a tough match but we also understand that we are not well positioned in the standings. I am confident in the ability of the players and that we have prepared well,” the skipper said.

Yanga have been in training for the past three weeks having decided not to play the CECAFA Kagame Cup and will come to the tie fresher compared to Gor who have played six matches in 12 days finishing the Kagame Cup at third place.

However, Yanga tactician Mensah believes it will not play to their advantage, saying that Gor might actually be better prepared than them.

Gor head coach Dylan Kerr has however admitted it will not be an easy road against Yanga after playing such a high volume of games.

“It has been tough for us because we just play and recover without much focus on training. But I have a group of players which is always willing to have a go and get results. It will be tough but we are ready. I know Yanga from my time in Tanzania and I know what they bring so we have prepared accordingly,” Kerr said.

The tactician will miss the services of defender Joash Onyango who is suspended for the game having picked up a red card against USM Alger. Also missing from the team that played their last Confederation Cup game is striker Meddie Kagere.

The influential Rwandese forward joined Tanzania’s Simba at the beginning of the month and Kerr has admitted it will be tough to fill his boots.

“Meddie was a great player with his work ethic and we will miss him. However, life has to go on. Joash has also been superb but I have players who are well capable of replacing him. We have a very able good crop of players and everyone in this team is capable of being in the starting 11,” the defiant coach said.

A win for Gor will move them closer to qualifying for the group stages and if the game pitting USM Alger and Rayon Sport in Kigali will not produce a winner, then they will move top of the table.