Good start for Greg Snow at the Karen Masters 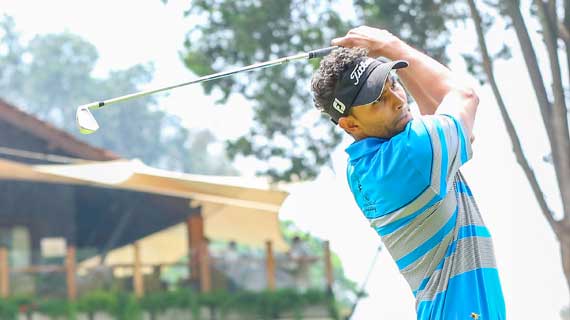 The event enters its second round today. The top 70 players will make the cut on Friday

Kenyan golf professional Greg Snow defied all odds to finish round one on a joint second position carding 67 points behind leader Stephen Ferreira of Italy.

Portuguese Ferreira  played a round of 10 under par 62 and a five shot lead going into day two of the Sunshine Tour .“What a way to start a tournament with such an inspiring score, I am chuffed,” he quipped of his record score.

He nevertheless had his day one campaign effectively sewn up with an eagle on the par 5- 15th.

“It was a good day in the office today. I drove the ball solidly well and savored a couple of good putts. The game plan tomorrow is to hold my nerves and keep the ball in play,” said Ferreira who won Uganda Open two years ago.

His fairy tale score in today/s round wasn’t his career best though. Three years ago, Ferreira carded an 11 under in the Zambian Open but still found his 10 under at the par 72 Karen Country Club course quite heartening what with the course record.

David Wakhu with a round of 3 under par 69 is the second best placed Kenyan professional after playing 36 in the front nine and 33 in the back nine. Despite dropping a shot on the par 4 ninth, Wakhu made up for a good day with four birdies on holes 3, 9, 12 and 18.

“The course is much better than it was last year. Three under wasn't that bad. The essence is to make the cut tomorrow (today) so let’s see how it goes,” said Wakhu.

Five Kenyans CJ Wangai, Dismas Indiza, Justus Madoya, amateur Daniel Nduva and Jeff Kubwa are lying joint 24th on 2 under par 70.Wangai who hit a hole in one in the Pro-Am on Saturday  was left to rue his round on the opening day.

“One of the players in our group was quite slow and this adversely affected my score. I am hoping to make amends on day two and indeed be in the money bracket. Two under isn't that bad,” said Wangai.

Wangai started off from the 10th tee and was 4 under after his first nine but dropped two shots on the par 5-3rd and par 4-4th to dip more than 10 places further below the leader board.

The event enters its second round today. The top 70 players will make the cut tomorrow