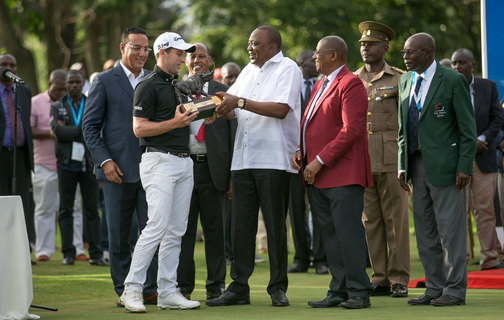 Speaking at the end of the 2018 Kenya Open Golf Tournament, President Uhuru Kenyatta affirmed his government’s commitment to using sports as a way of uniting Kenyans and creating opportunities of the youth.

The president urged the organisers of the Kenya Open, which was marking its 50th anniversary to : "Proceed with your plans to have Kenya Open join the main European Tour in 2019"

He challenged the organisers to be more creative and innovative so as to attract the best players even as they uphold highest degree of integrity.

This year’s tournament was won by the Italian, Lorenzo Gagli, who took home a first prize of 80,000 euros (KSH 10 million ) after a double playoff against Jens Fahrbring of Sweden who became second and won the prize of 55,000 euros (Ksh 6 8 million).

The President assured the golf fraternity of his Government’s support in ensuring success in all their endeavours.

He also said the Government would help facilitate the development of a golf academy in Lenana whose aim is to nurture golf talent.

The President said the academy would increase the nurturing and developing of golf skills among the youth in the country.

The President also thanked Kenyans who took part in this years’ competition saying although they didn’t emerge winners they would one day excel.

“You, and indeed all the players this year, have maintained the highest standards of sportsmanship. All of us can learn from your respect for the rules; from your consideration for your competitors; and from the history you have honoured by your conduct,” said the President.

The President however said there is need for more golf events to be held in the country to ensure that amateurs are exposed to many games which would serve as training events.

He expressed gratitude that plans were under way for a Safari Tour, a professional golf tour that will also serve as a training ground for juniors and amateurs – which is aimed at exposing them not just to local competition, but also to competition from other golfers in the region.

“These are steps we can take without too much trouble. But they will demand dedication; and they will require imaginative management on the part of the game’s administrators,” said President Kenyatta.

He said the game has never been more popular in Kenya than it is now, saying there are now more golf clubs in the country than at any other time, as the population is now familiar with the game courtesy of the media which is now keen on popularizing it.

“But we can ask: if golf builds character — and it does — what can we do to win converts for the game? And, frankly, what can we do to hasten the day when a Kenyan will take home the prize?” asked the President

He said the stakeholders need to seize the opportunity and start by opening the game up to more of children; by competing with the very best; and by raising the status of this competition.

“A few weeks ago, I saw our junior golfers before they left for a tournament abroad; their enthusiasm and skill showed me what is possible if only we recognise and nurture that skill,” said the President.

He thanked all stakeholders for organizing such an inspiring event aimed at marking the Barclays Kenya Open Golf Golden Jubilee.

The championship attracted 156 top golfers, among them 22 Kenyans, making it one of the most lucrative tournament on the European Tour qualifiers after raising its prize fund to mark the 50th edition.