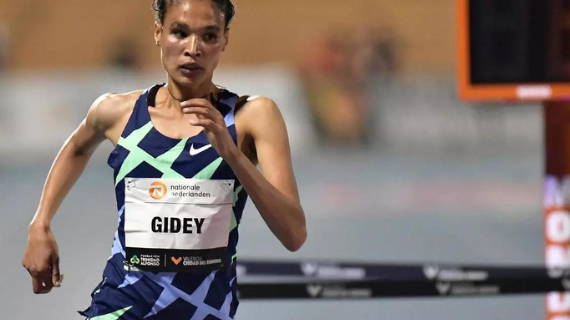 Just two days after Sifan Hassan clocked a world 10,000m record of 29:06.82 in Hengelo, Ethiopia’s Letesenbet Gidey – competing on the same track in the Dutch city – improved the mark by five seconds with 29:01.03* to win the Ethiopian Trials on Tuesday 8 June 2021.

Ababel Yeshaneh tracked Gidey for most of the way as they followed the blue lights on the inside of the track, the Wavelight technology moving at world record pace.

Yeshaneh dropped back in the latter stages, but Gidey continued her metronomic pace, churning out 72-second laps.

Gidey went through the bell just a couple of seconds inside 28 minutes, indicating she’d need a final lap of about 68 seconds to break Hassan’s mark. Despite having to navigate around a field of lapped runners, Gidey powered around the final circuit and stopped the clock at 29:01.03.

Yeshaneh later dropped out, but Gebreselama came through to take second place in 30:06.01. Tsehay Gemechu was third in 30:19.29.

Elsewhere in Hengelo, Gudaf Tsegay produced the fifth-fastest time in history to win the women’s 5000m in 14:13.32. Steeplechase specialist Getnet Wale won the men’s event in 12:53.28.

Unheralded Werkwuha Getachew smashed through the two-minute barrier for the first time in her career to win the women’s 800m in a national record of 1:56.67, while Freweyni Hailu won the women’s 1500m in a world-leading 3:57.33.