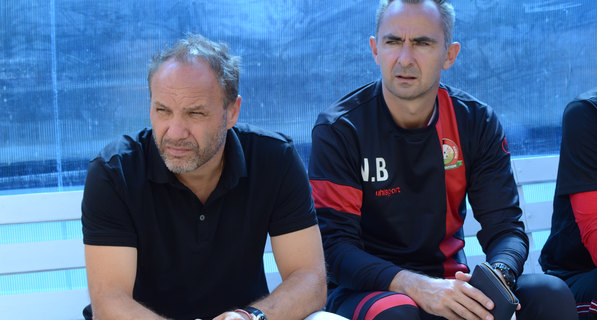 Migne: I don’t care about Ghana now. That is in the past. The focus now is on Ethiopia.

Harambee Stars head coach Sebastien Migne says he has a rough idea of his best 11 after watching two competitive matches against Ghana and Malawi. The tactician however says the national team door is open to new players even as he says he will use the month-long break before the Ethiopia AFCON qualifier to look at more players.

“I have some answer but in this team, it is a new process every time. The door is always open for players to come and go, even after this game. We have one month before Ethiopia and I will watch every player in their respective leagues and maybe we can have some new players,” the tactician said.

He was impressed with how the team fared against Ghana but wasn’t particularly happy with the performance against Malawi especially for most part of the first half.

“In the first half it was boring but sometimes its difficult to run the high level after an emotional game like against Ghana. Maybe we were not ready to fight three days after. Not just physically, but mentally also,” the tactician said.

The tactician’s focus now shifts to the game against Ethiopia next month where he hopes the team will maintain the same form and pick at least four points off the home and away back to back games.

‘I don’t care about Ghana now. That is in the past. The focus now is on Ethiopia. If we can get good results there then we can play a final against Sierra Leone in Nairobi and dream of AFCON,” the French coach said.