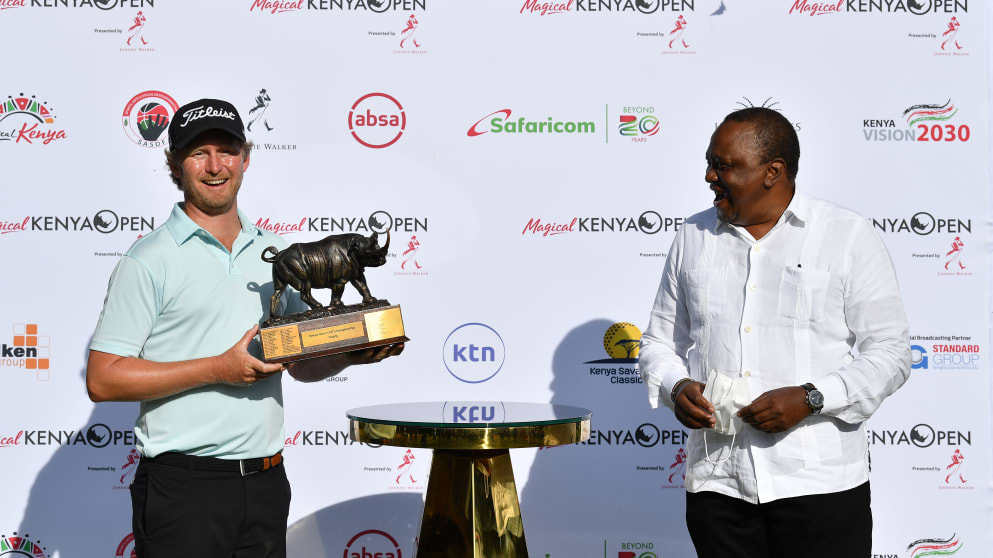 Harding's maiden European Tour victory in Qatar just over two years ago was his fifth win in ten months, and a tie for second the following week in this event pushed him into the top 50 in the Official World Golf Ranking and earned him a debut in the Masters Tournament, where he finished in the top 15.

The South African entered the final day at Karen Country Club with a two shot lead and was never caught as he carded a bogey free 66 to finish at 21 under, two shots clear of playing partner Kurt Kitayama.

American Kitayama briefly cut Harding's advantage to one as he carded two eagles in a 66 of his own, but the leader kept his cool as he earned a sixth worldwide victory in three years.

Scot Connor Syme carded a 64 to finish at 17 under, a shot clear of Spaniard Sebastian Garcia Rodriguez and two ahead of South African Jacques Kruyswijk and French duo Jean-Baptiste Gonnet and Romain Langasque.

Harding's maiden European Tour victory in Qatar just over two years ago was his fifth win in ten months, and a tie for second the following week in this event pushed him into the top 50 in the Official World Golf Ranking and earned him a debut in the Masters Tournament, where he finished in the top 15.

He had not had a top ten since September coming into this week but now moves into the top 15 on the Race to Dubai Rankings presented by Rolex and edges closer to the top 100 in the world.

"It was hard work," said an emotional Harding. "I was happy with the way I played.

"I'm glad I shot one better than a couple of years ago, I was bummed about that, but I'm just happy with the way I managed my game.

"I made a mess of 11 and 12 and ultimately the way I played 13 through 18 this week, it was a bit of a stressful time. I executed some shots and managed to make a couple of good par saves."

Kitayama and Harding went head to head in the final group at the 2019 Afrasia Bank Mauritius Open at Anahita, and the 35-year-old was glad to come out on top after seeing Kitayama prevail on that occasion.

"Kurt's an unbelievable competitor," he said. "I got him back for Mauritius."

Harding and Kitayama both parred their opening five holes in the final group and nobody had caught Harding as he entered the scoreable part of the course.

He got up and down from the side of the green at the par five sixth for a first birdie of the day but saw his lead trimmed to one as Kitayama rolled a 35 footer up two levels for an eagle.

Harding re-established his two shot lead with an approach to eight feet at the seventh and then produced maybe the shot of the week, driving the par four ninth to 12 feet and holing for an eagle and a four shot lead.

Kitayama hit a poor tee shot into the trees at the tenth but played out brilliantly to 25 feet and holed the putt to cut the gap to three.

He gave the shot back as he three putted the 11th but then chipped in at the 12th for a second eagle of the day to get within two and it looked like a two horse race was developing down the stretch.

Both men birdied from around ten feet on the 17th as Harding followed Kitayama in, and a routine par up the last handed Harding the trophy.

Syme was briefly alone in second after birdies on the third, fifth, sixth, seventh, ninth, 11th and 12th but faded down the stretch with two more birdies matched with bogeys.

Garcia-Rodriguez started his round with a bogey but picked up nine shots in his next 11 holes with an eagle on the 11th as he carded a 63.

Kruyswijk carded a 64, one shot better than Langasque, while Gonnet signed for a closing 67.