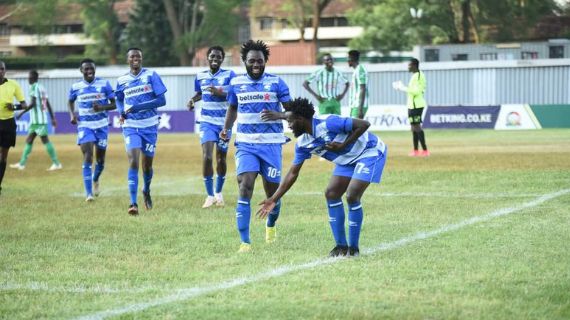 Leopards were the only team to register a win on Saturday

Caleb Olilo scored his maiden goal seven minutes from half time to see AFC Leopards notch up a 1-0 win over visiting Nzoia Sugar in Saturday FKFPL action in Ruaraka. This was the only win on a day characterized by draws.

The result sees Leopards go second on 32 points,two behind Tusker who have a game in hand despite being in action today.

Bandari's William Wadri and Bidco's Stephen Waruru traded penalties as the two sides drew 1-1 at the Mbaraki Stadium in Mombasa.

The result sees Bandari stay 5th with 27 points while Bidco are 9th on 19 points.

Western Stima and Posta Rangers played to a 1-1 draw at the Moi Stadium in Kisumu. Francis Nambute put Rangers ahead after 3 minutes but Mukisa Junior responded with a 17th minute goal. Rangers stay 14th on 16 points, three ahead of 15th placed Stima on 13 points.

In the day's early kickoff, Tusker and KCB played out a 0-0 draw at Ruaraka, a result that sees Tusker stay top of the log with 34 points.