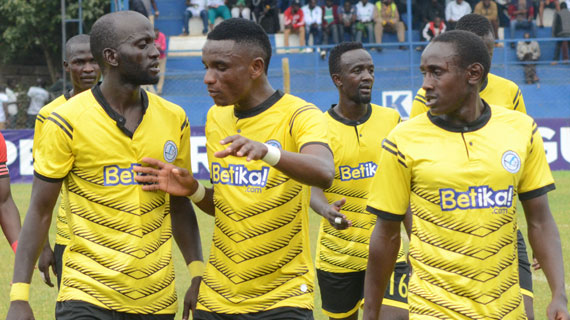 Sofapaka topped Mathare United 4-2 while KCB maintained their perfect start to the season with a 1-0 win over Bidco United.

Sofapaka were the day’s biggest winners as the FKF Premier League continued on Saturday 9 January 2021.

The 2009 champions raced into a 3-0 half time lead against 2008 champions Mathare United, their goals coming from Lawrence Juma’s hat-trick and Nixon Omondi’s solitary effort.

It was indeed 3-0 less than 20 minutes into this fixture played under wet conditions in Wundanyi, Juma opening the scoring 12 minutes after kickoff before Nixon Omondi doubled the scoring a minute later. Juma landed his brace against a shell shocked Mathare on 16 minutes.

The slum boys responded with two second half goals from Daniel Otieno on 71 minutes before Chris Oduor’s 83rd minute goal brought them to within striking distance of Sofapaka who got their cushioning goal at the death from hat trick hero Juma, 4-2 the full time score in Taita Taveta County.

The day’s early kickoff at Kasarani saw KCB pip Bidco United 1-0 to make it six wins from six, staying top of the log for yet another week. Reagan Otieno’s strike three minutes into the second half secured the three points for the bankers.

Wazito and AFC Leopards faced off at the Utalii Ground in what was a clash between master and student. Current Wazito boss  Francis Kimanzi was in charge of the Mathare United squad that won the 2008 league title. Anthony Kimani, sitting in the Leopards dugout was part of the title winning squad from twelve years ago. There was little sentiment however as Kevin Kimani’s 20th minute goal proved to be the difference, Wazito inflicting a second loss to Leopards courtesy of the 1-0 result.

Over at the Afraha Stadium in Nakuru, Zoo Kericho and Bandari played out a 1-1 stalemate. The visitors from Mombasa took a 1-0 lead into the interval courtesy of William Wadri’s 22nd minute goal before Summy Golola’s 66th minute equalizer earned Zoo a share of the spoils.