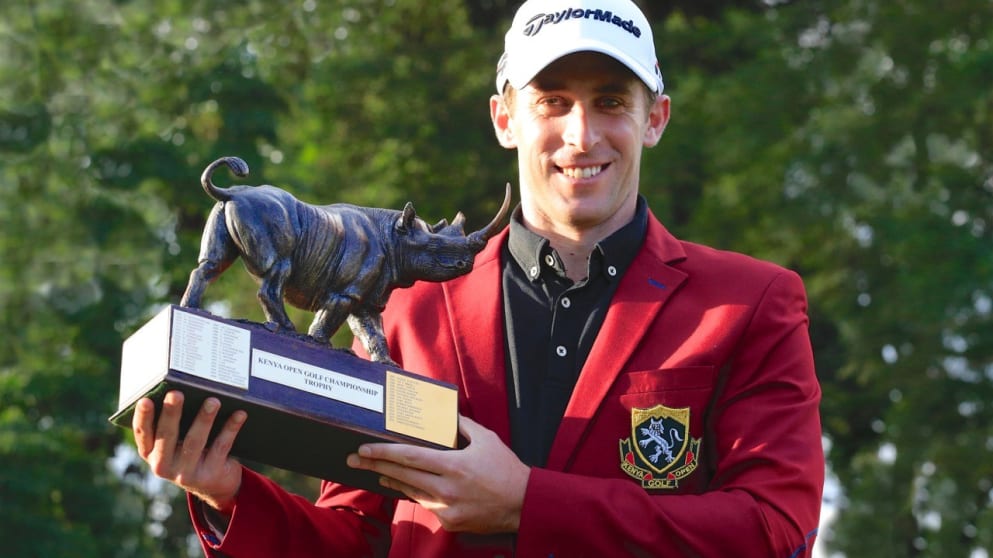 The event, which was cancelled in 2020 due to the COVID-19 pandemic, returns to the venue for a second time. Previously, it held the honour of hosting the tournament’s debut as a European Tour event in 2019, and it will now be the stage for both this week’s tournament and next week’s Kenya Savannah Classic.

This week’s Magical Kenya Open makes its return to the European Tour schedule this week as the first of two events in back-to-back weeks at Karen Country Club in Nairobi.

The event, which was cancelled in 2020 due to the COVID-19 pandemic, returns to the venue for a second time. Previously, it held the honour of hosting the tournament’s debut as a European Tour event in 2019, and it will now be the stage for both this week’s tournament and next week’s Kenya Savannah Classic.

Guido Migliozzi arrives at Karen Country Club to defend the title he won in 2019 after last year’s edition was cancelled due to the COVID-19 pandemic.

The Italian, who broke through for his maiden victory in just his 14th event on the European Tour, went head-to-head with playing partner Adri Arnaus two years ago and held off a chasing pack that included Justin Harding, Louis De Jager, Gaganjeet Bhullar and Kalle Samooja – who all held a share of the lead during a thrilling final day.

Migliozzi, who went on to win the Belgian Knockout later that season, is searching for his first victory since 2019 – and arrives in Kenya hoping to build on last week’s runner-up finish at the Commercial Bank Qatar Masters. The Italian, who was one of just four players to go bogey-free in the final round, posted a six-under 65 to finish one shot behind last week’s champion Antoine Rozner.

Although the 2021 Magical Kenya Open will be just the second time the event has appeared on the International Schedule, the event boasts a rich history which dates back more than 50 years. and includes a variety of impressive champions.

Starting in 1967, the event boats a list of past champions which include Seve Ballesteros and Ian Woosnam, who won on the Safari Tour before the event formed part of the European Challenge Tour schedule in 1991.

A different winner has been crowned at the Kenya Open in each of the 27 editions since 1991.

This week’s field features all five of the most recent Magical Kenya Open Champions: Guido Migliozzi, Lorenzo Gagli, Aaron Rai, Haydn Porteous and Sebastian Soderberg will. Three of that number - Migliozzi, Porteous and Soderberg – all celebrated their triumphs at Karen Country Club. Edoardo Molinari, who his second professional title here in 2007, also makes his return this week.

Meanwhile, Darren Fichardt, who held last week’s 54-hole lead and finished in a share of second, is hitting a milestone this week. The 45 year old South African, who is a five-time European Tour winner - will make his 400th start this week.

The man in red

The Green Jacket donned by the winner of the Masters Tournament at Augusta National is undoubtedly the most famous jacket in golf, but Kenya ramped up the fashion stakes by introducing a red jacket for the 2018 Kenya Open – which was introduced as part of the Kenya Open’s 50th anniversary celebrations.

For the first time ever, the winner of the Kenya Open – Italian Lorenzo Gagli – received a locally-designed jacket in honour of his victory in East Africa. Designed by Kenyan fashion designer Nick Ondu of Nick Ondu Sartorial, the jacket is red in colour and has bespoke features on the back and arms.