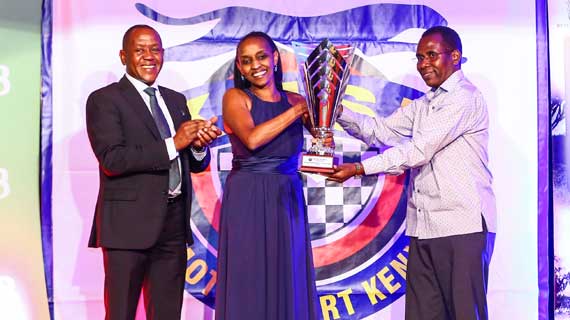 The Deputy Secretary Ministry of Sports, Culture &amp; Heritage, Wesley K. Maritim (right) with the Kenya Motorsports Federation- Chairman, Phineas Kimathi, as they present a trophy to the Motorsports Personality of the year, Tuta Mionki.

Tuta garnered 5 votes against Jessop's two and Flash's one in an event which saw motor clubs and KMSF commissions vote.

Asked what she attributes to her season success, Tuta said: "Basically, we had a very strong team and just the fact that they helped us focus on the car and coming from a bad season in 2017 which saw us finish in only two events,  we decided we want to do it a lot more meticulously and better, so we took each event at a time."

Tundo and his longstanding partner Tim Jessop received their trophies for  the KNRC main class and the B13 Class which allows competitors to use bigger turbo destructors and a sequential gearbox  is being phased out by KMSF effective 2019.

Bengi and Tuta savoured their KNRC  Division 1 and group  N double and so were Mombasa crew of Sohanjeet Singh Puee and Adnan Din who won Division Two and Group S.

Division III and KNRC SPV class champions were  Nikhil Sachania and Alfir Khan. Sachania who is a physically challenged driver and who drives a hand controlled Evolution 10 had his trophy received by his team manager Tinu Khan as he was out of the country.

The overall Raid champions were Ross Field and Quentin Savage who also won the Motorcar-Prototype class.

The Motorcar-Modified class honors went to Adin Haq and Kavit J. Dave while the Buggy was taken by Abid Ganatra and Sameer Mohammed.

KCB Group Marketing and Communications Director Angela Mwirigi noted that after a solid 16 years of the rally sport support they are proud as a Group to continue supporting various disciplines of motors sports and sports in general.

"In the next three years we will be supporting motorsports and look forward to a very strong partnership with KMSF," said Angela.

KCB are expected to announce their return to the title sponsorship of the 2019 KNRC in due course.

KMSF Chairman and WRC Safari Project CEO Phineas Kimathi said 2019 will be an eventful year what with the WRC Safari candidature in July.

He said Clubs will now receive an improved facilitation of the KNRC sponsorship while KMSF will take over the provision of the safety  chopper.

Kimathi added that homologation of cars for African countries has been extended by FIA from four to eight years meaning teams will not have to invest on new machines when the four year duration ends.

Kimathi added that the first round of the KNRC will be held on the first week of February.