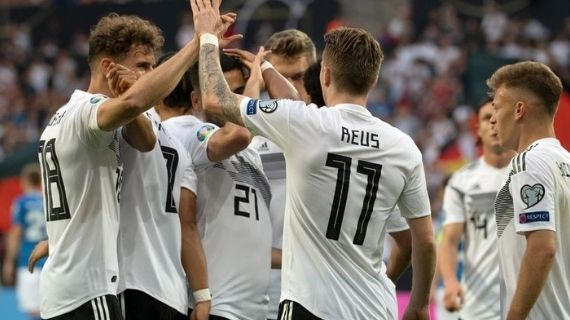 We take a look at groups E and F

Coach: Luis Enrique
Luis Enrique stepped down in June 2019 for personal reasons but returned to his post the following November after qualifying had concluded. He previously guided Barcelona to UEFA Champions League glory in 2015.

Key player: Gerard Moreno
In the form of his life, brimming with confidence and a newly-crowned UEFA Europa League winner. Loves to cut in form the right on to his exquisite left foot but will often be asked to perform as a false nine this summer – Spain’s chief goal threat but a No10 too.

One to watch: Pedri
There have been all number of prodigious young talents down the years but few who, at 18, slender, relatively small and in only their first full season, can become the dominant midfielder at a club such as Barcelona. His football intellect is frankly incredible.

Did you know?
Spain are the only team to have successfully defended the EURO title, in 2012.

Coach: Janne Andersson
The brains behind Sweden's recent renaissance, Andersson took charge in 2016, steering his side to a first World Cup in 12 years, then topping a UEFA Nations League group including Russia and Turkey.

Key player: Emil Forsberg
Pacy, creative and physically strong, the Leipzig midfielder will shoulder much of the responsibility for Sweden’s attack. He has a fine shot, and is one of the likely free-kick takers, along with Sebastian Larsson.

One to watch: Kristoffer Olsson
Slight of frame, the Krasnodar midfielder has a toolbox full of dribbles and smart passes that are as effective as they are easy on the eye.

Did you know?
In 1992, hosts Sweden won a group ahead of England, France and eventual victors Denmark before being edged out 3-2 by Germany in the semis.

Coach: Paulo Sousa
Jerzy Brzęczek steered Poland through qualifying but was replaced in January 2021 by Paulo Sousa, who represented Portugal as a midfielder at EURO '96 and UEFA EURO 2000. A varied coaching career has so far taken him to England, Hungary, Israel, Switzerland, Italy, China and France.

One to watch: Piotr Zieliński
Certainly no fresh-faced newcomer at 27 years of age, but the Napoli midfielder has long been tipped to make a big impact on the international stage – and this could be his moment to thrive.

Did you know?
Jakub Błaszczykowski is Poland's all-time EURO top scorer with three goals; Lewandowski needs one more goal to match him.

Coach: Štefan Tarkovič
The assistant assumed temporary charge for a second time in October when Pavel Hapal departed the helm after the play-off semi-final, but was given the job on a long-term basis in December 2020. He was on Ján Kozák's coaching staff for EURO 2016.

Key player: Marek Hamšík
Slovakia's most-capped player and all-time top scorer, the 33-year-old captain remains the heart of the national team. Now at Swedish club Göteborg, Hamšík dictates play from midfield, with enduring energy and stamina. It is hard to imagine a successful Slovakia side without him.

One to watch: Tomáš Suslov
“I told my father I would play with Marek Hamšík one day,” said left-winger Suslov, and the 18-year-old was proved right last November. Picked up from the Tatran Prešov academy, Groningen's young wide man shows immense promise.

Did you know?
Eight of the Czechoslovakia XI that won the 1976 final were from Slovakia.

Coach: Marco Rossi
The Italian former defender had coached in Hungary for four years when he took over the national-team helm in June 2018.

Key player: Willi Orbán
Strong in the tackle, Leipzig centre-back Orbán is a no-nonsense defender who also offers a real threat at the other end of the pitch. His four international goals between October 2018 and October 2020 made him his country's second top scorer over that two-year period.

One to watch: Roland Sallai
Winger or second striker, Sallai comes into this EURO on the back of a breakthrough Bundesliga season with Freiburg: eight goals and six assists. With a great international hit-rate leading up to the finals, he is a fine foil for captain Ádám Szalai.

Coach: Fernando Santos
A journeyman defender, Fernando Santos coached Portugal's big three clubs, taking charge of the national team in 2014 after a stint as Greece boss. He steered them to success at EURO 2016 and the inaugural UEFA Nations League.

Key player: Cristiano Ronaldo
Portugal's most-capped player and all-time top scorer may be 36, but he ﻿will be looking to scratch a small itch at EURO 2020: he has never top-scored at a EURO or World Cup finals.

One to watch: João Félix
An attacking player of majestic skill, the Atlético Madrid man is the latest star to bolster a Portuguese side laden with talent. He made his senior debut aged 19 in Portugal's triumphant 2019 UEFA Nations League Finals campaign.

Did you know?
October 2019's loss to Ukraine was the first Portugal had suffered under Fernando Santos in a EURO (or indeed Nations League) game – qualifier or final tournament – since his appointment in September 2014. His only past defeats had come in the World Cup.

Coach: Didier Deschamps
Deschamps captained Les Bleus to victory at the 1998 World Cup and EURO 2000. France boss since 2012, he led them to World Cup glory in 2018 and can secure the second international double of his career at EURO 2020.

Key player: Kylian Mbappé
The Paris forward is happier the better the opposition. In between tournaments, France tend to take on sides who sit back and pack the defence and midfield, making it hard for Mbappé to use his strengths. Better sides try to play more and that's when Mbappé springs into life, lethal on the break.

One to watch: Kingsley Coman
After missing the FIFA World Cup triumph because of injury, Coman has extra motivation. Deschamps' desire to balance the side could mean the Bayern speedster having to content himself with a bench role. As he's as quick as Mbappé, no opposition defender will relish seeing Coman's number flash up.

Did you know?
France will be appearing at their 13th straight final tournament. They haven't missed one since the 1994 World Cup, and have reached five finals during that sequence, winning three.

Coach: Joachim Löw
After 15 years at the helm, this will be the final tournament for the coach who never failed to lead Germany into at least the semi-finals of EURO.

Key player: Thomas Müller
Two-and-a-half years after being cut to make room for a rebuild, Germany have recalled Müller, a vocal leader with vast experience at major tournaments. The 31-year-old never fails to transmit his winning mentality to his team-mates.

One to watch: Kevin Volland
This entry previously featured Kai Havertz, but after scoring the winner in the UEFA Champions League final he should be on everyone's horizon. The surprise package might be forward Volland, who comes in with an ambitious attitude and a fine record of 18 goals in 40 matches in his first season at Monaco.

Did you know?
The finals will be Germany's 26th consecutive major tournament, namely World Cup or EURO.