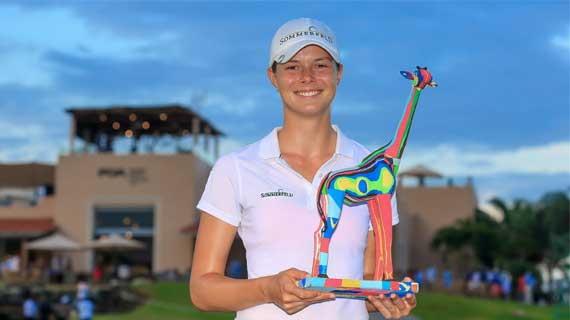 Esther Henseleit is the winner of the Kenya Ladies Open golf tournament  held at the Vipingo Ridge.

Esther Henseleit from Germany is the winner of the inaugural Magical Kenya Ladies Open golf tournament  held at the Vipingo Ridge in  Coastal Kenya .

Henseleit shot a course-record round of 64 on the final day to make history as the first winner of the tournament with a total score of 14-under par 274 –one shot ahead of her nearest challenger.

Her final day performance saw her do what many considered to be the unthinkable -turning a seven-shot gap into a win. She played a flawless round to hand in a bogey-free scorecard, adorned with eight birdies, and one which will take quite some effort to topple as one of the most incredible comebacks in the history of the game.

She carded a front nine total of 31, courtesy of birdies at the par-4 first, par-3 fourth, par-5 sixth, par-4 seventh and the par-4 ninth. She followed the superb front nine display with a near-similar performance on the back nine, holing birdies at the 11th, 13th and 15th for a total of 33.

Having already sealed the 2019 Ladies European Tour Rookie of the Year title, Esther added another feather to her cap by becoming the 2019 LET Order of Merit Champion having taken maximum points from the tourney (150) to take her total points tally for the season to 743.06.

Speaking after the win, she said:

“To close the season with a win is the best I could imagine and to be the Order of Merit winner is just unbelievable. I just tried to play many birdies, I hit really good irons and played many short birdie putts and managed to play it good. The course played a bit easier today because the greens were a bit softer.”

For her outstanding work, Esther took home Euros 45,000 (over KShs 5 million) in addition to the Euros 2,000 (KSHS 224,000) she won earlier in the week after clinching the individual pro win at the Pro-Am event of the tournament.

21-year-old Aditi Ashok from India  finished second as she shot an impressive round of 65 on the final day of the tournament to end her Magical Kenya Ladies Open campaign with a 13-under par 275 score to finish in second place. She too was impressive, holing eight birdies and an eagle but dropped three shots at the par-3 eighth. For her outstanding effort, she took home Euros 27,000 (KShs 3 Million).

It was disappointment for Saturday’s overnight leader, Julia Engström from Sweden, who had a final day she might rather forget after she carded a 2-over par 74 round to take her total to 11-under 277 -three shots off the lead. She struggled with form, hitting only two birdies and dropping shots at the third, 10th, 13th and 17th holes. Her performance saw her take home Euros 18,000 (KShs 2 million) so not all was lost.