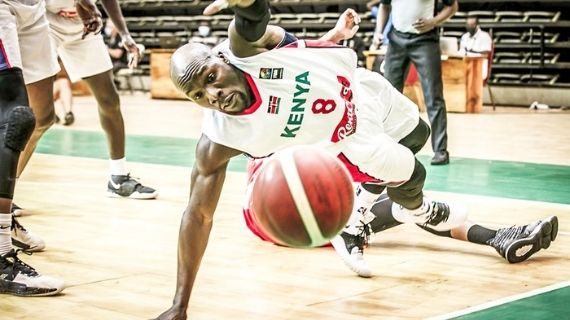 Victor is grateful to his coaches Coach Carey “T9” Odhiambo of the Dumas and Coach Liz Mills of the Kenya Morans for molding his game.

Victor “Electric” Ochieng is one of the Morans players who played at the Afro Basket qualifiers in Yaoundé, Cameroon where they secured AfroBasket qualification for the first time in 28. He hopes to be part of the squad in Rwanda later this year.

At 35 years old, 6ft “Electric” Ochieng is a veteran player who plies his trade locally. He plays for the Equity Dumas in the Kenya Basketball Federation Premier League and was one of only two locally based players who made the 12-man squad to Yaoundé.

When asked where his moniker “Electric” was derived from Victor laughs out loud during the Zoom call we are having. “That name was given to me when I was a rookie starting out in 2008 by my coach in The Lions team because of my body size. People were impressed by my speed and that name has stuck since then,” he states. He modeled his game around fellow shooting guard retired Miami Heat player Dwyane Wade who similarly is known as “The Flash” due to his pace.

Victor, who grew up in Mombasa, only started playing basketball when he was in high school. He describes his first encounter with the game he loves as something straight out of a movie script. “I was in Form 2 just strolling around school when the basketball made its way out and bounced off my leg from the court. I was prompted by the players in the court to throw it back to them.

They goaded me to join them though I had never played before. I soon discovered that I had a knack for it,” Victor states. After high school he joined Kampala International University for his Diploma in Business Administration and later joined KCA University to study Bachelor of Arts in Human Resources.

He continued playing intermittently with his school teams. It was only a chance encounter with a training session with The Lions team who were the Premier League champions that he requested to join them. He trained with the team in 2008 for a year as a role player before he was granted a spot in the main rotation. “That was the first time that I started playing professionally apart from the school games and the Malindi Nets local team I had back home where we were self-sponsored. It was a steep learning curve but I learnt a lot during this period,” Victor says.

After a couple of seasons, he switched teams to Kenya Ports Authority where he was part of the team that helped them to win two Premier League titles. During this period, though underrated, Victor had established himself as one of the elite two-way players in the league. He was devastating on offence and a nuisance in defense. “Zadock Adika, the Dumas Team Manager noticed my game and approached me to join the Dumas to add some veteran steel to the young core in Equity ranks. I accepted the challenge and in 2019 switched,” he states.

His performances where he regularly took assignments guarding the opponent’s best player while also carrying the load in offence earned him a callup in the national team for the first time “I am grateful to Paul Otula the Chairman of Kenya Basketball Federation and the then coach Cliff Owour for the call-up. After my first call-up I established myself as a main roster player with the Kenya Morans.”

Despite the high of establishing himself in the national team the 2019 season ended in disappointment on the domestic front as Dumas’s inexperience caught up with them. Even though they finished in 3rd place in the league they were eliminated in the playoffs at the quarterfinal stage. It is a heartbreak that Victor has not overcome yet.

The 2020 season was called off due to the COVID-19 pandemic and he hopes to atone for the loss in the 2021 season when the dates of resumption are announced.

“2020 was difficult year for the sports fraternity because there were no games to play. I had to take up jogging and self-training indoors to keep up my fitness up because even though the league had been called off, I knew that at the end of the year there were national team games to be played” Victor stated.

“I am grateful to Equity for continued support during the COVID-19 pandemic period when Dumas team continued to get regular allowances which went a long way in supporting the players in the team. It showed that the bank cares about us, as it was one of the few teams in the league to do that” he adds.

Victor works in the finance department at Jamii Telkom specializing in credit control where incidentally he encounters Equity. “I am responsible for platinum finance and through that I handle the team sponsors’ account where I do a lot of reconciliation on the internet sites that we put up for the bank,” he says. On how he manages to handle having an 8-5-day job and being a professional basketball player, Victor says, it takes a lot of discipline and perseverance to deliver on both fronts.

He attributes his improved skills to the opportunity to play for national team. “We play against players who ply their trade mostly in Europe. This has added an edge to my game. I hope to bring that experience to help turn Dumas into a juggernaut on the domestic front”.

Victor is grateful to his coaches Coach Carey “T9” Odhiambo of the Dumas and Coach Liz Mills of the Kenya Morans for molding his game. “We are gunning for the Premier League title so that we can qualify for the inaugural Basketball Africa League which is the continental tournament for clubs in Africa, the equivalent of the UEFA Champions League in Europe,” he says.

“At the continental level you have to keep your concentration to the last millisecond,” he adds. “You blink you die. That was attested by our victory against Angola in Yaoundé where my teammate Tyler made a basket in the last 6 seconds when we were down Angola 73 -72 Kenya to win Kenya 74- Angola 73. It was one of my highlights in the national team. We were underdogs in Cameroon but we won one of three games which was enough to secure us a ticket to Rwanda for the Afro Basketball tournament later this year,” he says.

Victor applauds what Equity is doing supporting sports, especially basketball: “The bank is supporting two teams who are in the top tier in the Kenya Basketball Federation Premier League, Dumas, the men’s team and Hawks the ladies’ team. When you look at the squads of both teams, you realise about 30 young men and women are being supported to showcase their talent through the bank.”