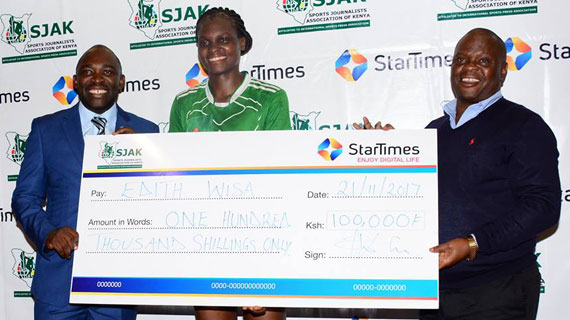 Wisa, who has had an amazing season received a 42 inch flat screen TV a trophy and 100,000 shillings in cash from StarTimes who have partnered with the Kenya Sports Journalists Association of Kenya SJACK to reward the best talents

Wisa was rewarded for her excellent performance during the recently concluded Africa Cup championships in Cameroon as her exploits helped Kenya qualify for the World Championships to be held in Japan in 2018.

“This is a big motivation for my career and I am excited to have received this award. I am more encouraged to work harder in the future in order to support my team achieve better heights in future.” She said as she spoke to michezoafrika.com after receiving the award in Nairobi on Tuesday.