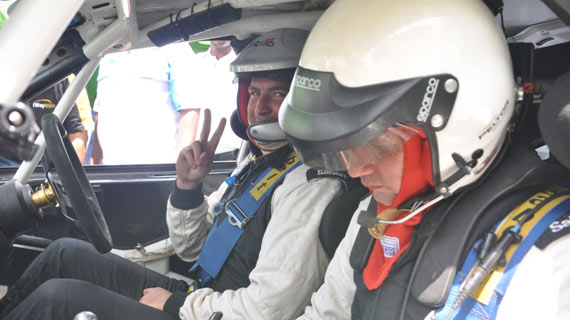 Ian Duncan navigated by Amaar Slatch in a Mitsubishi Lancer Evolution 10 will be the first off the ramp in Saturday's Fly540 RSC Rally slated for Kajiado this weekend.

The event has attracted quite a number of drivers in various categories.

The 2WD class has the likes of leader Leonardo Varese who is seeded 35th, Daren Miranda ans Sammy Nyorri.

The Classic category has Jonathan Somen who will be testing his Ford Escort MK2 ahead of the East African Safari Classic.

Raaji Bharij has also entered the classic class in a Died Escort Mk1. Others classic cars enlisted for the event are Ramesh Vishram in a Ford Escort Mk2 and Stefano Roca INA Datsun 240Z.

Charles Hinga, a former Two Wheel and Division 2 contender said during the launch that he excited to be back in action.

"Its such a great feeling to be back in action. I know I have a few cobwebs to shake off but its going to be fantastic fun," said Hinga who will be driving an ex Eric Bengi Toyota RunX.

Kenya Motor Sports Federation Chairman Phineas Kimathi thanked Fly540 for coning on board as title sponsors for the event.

"We are glad to have Fly540 as our title sponsors. We hope to have a great event at the weekend and urge spectators to turn up at Champagne Park which is the official viewing area," said Kimathi who is also the chairman of the organizing club Rallye Sports Club (RSC).

Bob Kaugu of Fly540 said they are proud to be associated with the rally sport and promised continual support for the organizing club.

"On behalf of Fly540 we are proud to be associated with RSC on the occasion of their KNRC event. The rally will also offer us an opportunity to interact with our clients during the event," said Kaugi.

The rally will be flagged off at Galleria Mall in Nairobi on Saturday at 07:00hours.

The rally program will however begin with scrutineering at Galleria on Friday morning.

Thereafter there will be an overnight parc ferme at Galleria Mall with the cars expected to start the following day.

Thereafter the rally traffic will head to the 32km Kajiado/Kipeto stage and into the 3.2km Champagne Park which is the designated viewing point.

The 84km four stage loop will be repeated twice to make up a total competitive mileage of i68km and a liaison distance of 143km.

The Kenya National Rally Championship has been to Mombasa, Rift Valley for the Safari Rally and Eldoret.