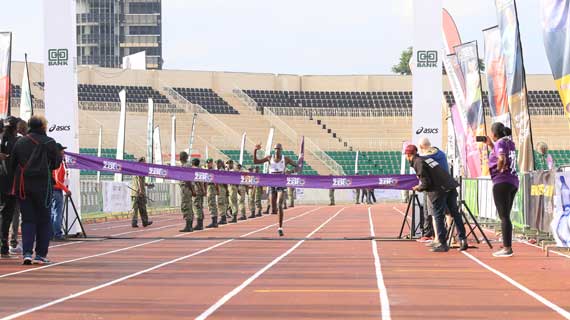 The 2020 edition of the The Beyond Zero Marathon attracted 15,000 participants including president Uhuru Kenyatta who took part in the 2KM Race to support First Lady Margaret Kenyatta.

Vincent Kipchumba and Lydia Njeri are the winners of the 2020 edition of the Beyond Zero Marathon held in Nairobi on Sunday 8th March .

In the 10KMs race, Vincent Yegon  clocked 28:23 to finish ahead of second placed  Benard Kipkemoi  (28.38). Jackson Kavesa finished third having clocked a time of 28mins and 40 seconds.

In the wheelchair race, Caleb Odio was the winner followed by John Wambuau in second and Samuel Kuria in third. In the Corporate Teams category, Timaflor floored the field to take top spot ahead of Kenya Broadcasting Corporation that finished in second place.