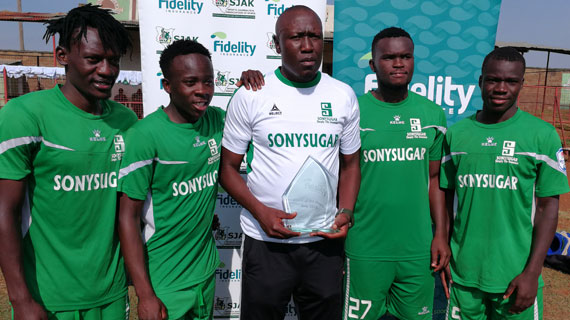 Odhiambo who has masterminded a complete turnover for the sugar millers beat Bandari’s Bernard Mwalala to the gong.

Odhiambo, formerly with Chemelil Sugar collected the most points of the 17 other Kenyan Premier League coaches beating Sofapaka, Nzoia Sugar and Mathare United but fell to AFC Leopards by a solitary goal.

Bandari, on the other hand played one match less in July winning two games and drawing one.

"I'm very thankful first of all to the almighty then to my players and team management for the good work that has culminated in this award. It has taken a lot of hard work and sacrifice to reach here. When I took up this job it seemed impossible to revive the club. It was a huge risk but I was confident in my ability and moving from 18th to 8th on the table is testament." Odhiambo remarked

The tactician jumped ship from Chemelil to Sony mid season reinvigorating the 2006 champions from an alarming lull.

"I identified a weakness in the team and engaged everyone in addressing it. Leadership was lacking and I had to sign up one or two players to give the rest direction. Fortunately, everything went well and players responded positively." Odhiambo noted

His focus is to win the rest of his league matches and finish in the highest possible position. "I've got phenomenal players in the likes of Agwanda and the rest who have played key roles in our rise and hope we continue on our form." Odhiambo said.

Sony are currently placed eighth on the table and have been on a fine run of eight wins on the trot. The tactician hopes he can push them into a top five finish.