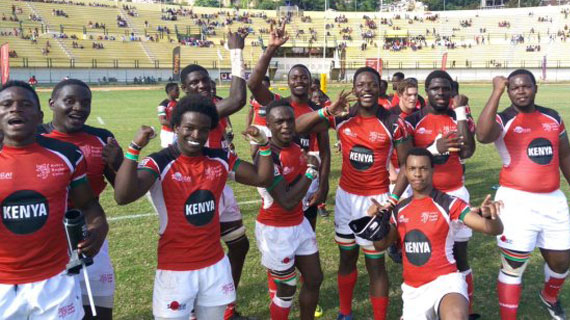 Kenya suffered a 63-11 loss to Uruguay in their opening match at the World Rugby Junior Trophy tournament in Brazil on Tuesday night. Kenya’s side, known as Chipu, are making only their second appearance in the competition having debuted in 2009 when it was hosted here in the country.

Against a bulked up Uruguayan side, the African champions could only conjure one try and a twin of penalties by Dominic Coulson.

In contrast, Uruguay who seemed better prepared for the contest crossed over the line nine times, six of them being converted and also drilled home two penalties to pick up the handsome opening day score.

“It was tough; Uruguay have big strong forwards and they exposed us on that end of the pitch. I think we diverted abit from our game plan which was to suck them in and try get them out wide but their line breaks were too quick and they put us under pressure and exposed our weaknesses,” Chipu assistant captain Coulson said after the match.

A perfect start saw Uruguay take a 14-0 lead courtesy of two tries by Sonneveld Malleret and D’Avanzo Ferres with the latter booting home both extras. Kenya momentarily jumped back into contention through Coulson’s penalty, but there was no stopping Uruguay who stretched a 39-3 lead at half time.

In the second 40 minutes, Acros Perez Picardo and Garese Pastorino went over with Ferres again converting both before Coulson popped up with another penalty. But the little hopes of a comeback, punctuated by a Samuel Were try were dashed with Uruguay bossing the tie.

Kenya next faces home side Brazil in their second match with the hosts having started off also with a loss against Japan.