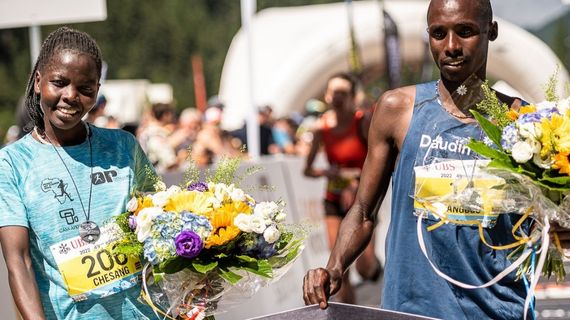 On a day of nail-biting racing in the Swiss Alps, it was Esther Chesang and Mark Kangogo, both of Kenya and both in their first participation at the race, who claimed victory at The Race of the Five 4000s in Sierre-Zinal, the sixth Gold Label race of the Valsir Mountain Running World Cup on Saturday 13 August 2022.

On a day of nail-biting racing in the Swiss Alps, it was Esther Chesang and Mark Kangogo, both of Kenya and both in their first participation at the race, who claimed victory at The Race of the Five 4000s in Sierre-Zinal, the sixth Gold Label race of the Valsir Mountain Running World Cup on Saturday 13 August 2022.

Despite strong performances, Maude Mathys and Kilian Jornet were unable to extend their winning streaks, finishing second and fifth, respectively.

With 6100 participants making the 31km, 2100m-plus journey through the mountains of Valais, those in the tourist category had been on the trails for more than six hours by the time the elite runners took off at 11am. Straight into the race's infamous opening climb under clear blue skies, it promised to be a hot race. The bone-dry, dusty trails offered little traction on the route's fast, technical descents, and many runners were to reach the finish covered in varying quantites of dust and blood.

In the women's race, Chesang was at the front from start to finish, though it was anything but a boring race. Going out hard, she led by over two minutes at Ponchette, after less than an hour of racing. Chasing behind were Mathys, the Swiss winner of the last three editions, and Philiaries Kisang, the Kenyan winner of last weekend's Thyon-Dixence. They themselves were almost four minutes clear of the next group. This separation of the front three would remain all the way to the finish in Zinal.

Through the middle third of the race, the elastic between Chesang and Mathys stretched and contracted. With Kisang falling away, the leading pair took turns gaining time on the undulating trails up to Hotel Weisshorn, with both athletes at points running under Mathys' course record splits from 2019.

However, as the race entered its closing chapter after Hotel Weisshorn, it was Mathys and her superior descending skills that had the upper hand. Chesang, a 69-minute half marathon runner who reportedly only trained for her debut mountain race for two months, was by no means slow, but the Swiss champion's technical prowess saw her floating over the technical terrain, bringing her closer and closer to the lead. In the tense final kilometres, there were times where she would have been able to look up and see Chesang, had she not been concentrating on the trail.

Ultimately, Mathys ran out of road. Chesang crossed the finish line first, taking the win in her first ever outing in the mountains, in the end just 30 seconds ahead of the three-time champion Mathys.

It was a lonely run in for Kisang in third. She came in over five minutes later but still three minutes ahead of Teresiah Omosa, also of Kenya, in fourth. Ireland's Sarah McCormack ran an eight-minute PB to finish fifth, having passed USA's Bailey Kowalczyk on the final descent.

Having been the dominant force of the Valsir World Cup so far, it was finally a bad day for Joyce Njeru, who did not finish.

In the men's race, it was another Kenyan debutant who pushed the pace early on. Unlike Chesang, Kangogo – second at Thyon-Dixence last weekend – had company. Among those who kept up with the early pace were Kangogo's compatriots Patrick Kipngeno and Philemon Kiriago, the Run2gether pair who have been the standouts on the Valsir World Cup so far this year, and the great Catalan Jornet, nine-time champion of Sierre-Zinal.

Gradually that group broke as first Kangogo and Kipngeno pulled away from the rest, then as the gradients eased after Chandolin, Kangogo pulled away from Kipngeno. Running ahead of course record pace, his lead grew all the way to Hotel Weisshorn and although he slowed dramatically in the final kilometres and dropped behind the record, he was never in danger of being caught.

Falling to the ground as he crossed the finish line, Kangogo recorded 2:27:31 for the third-fastest time in the race's history; only Jornet and Petro Mamu, first and second in 2019, have run faster.

But if there was a processional air to Kangogo's finish, behind there was frantic racing in the very final metres.

Remarkable runs for second place are becoming a tradition at Sierre-Zinal. After Robbie Simpson's incredible move through the field in 2021, this year it was the turn of Andreu Blanes. The Spanish orienteer was nowhere early on, over four minutes down on the leaders at Ponchette. Biding his time, he picked up a few places through the middle section of the race, then from Hotel Weisshorn to the finish he flew. No-one else was even close to his splits.

Where Mathys ran out of road, Blanes had just enough, passing Kipngeno on the final descent and giving himself just enough of a buffer to celebrate, falling to his knees as he crossed the line in second, 14 seconds ahead of Kipngeno in third.

But if the race for second was exciting, the race for fourth was a heart-stopper. Jornet and the Eritrean Mamu, sparring partners at this race before, were also gaining hard. Metres apart, they passed a fading Kiriago, who took a horrible fall, in the closing minutes.

On the road into the finish the nine-time champion thought his fourth place was secure, but as Jornet was high fiving the fans Mamu was right behind, his footsteps hidden by the noise of the crowd, winding up to a ferocious finishing kick. By the time Jornet realised what was happening it was too late. Leaning for the line like he was racing on the track, Mamu snatched fourth place by a tenth of a second.

Kiriago did a commendable job of limiting his losses after his fall and crossed the line, covered in dust, just 28 seconds later to take sixth place.