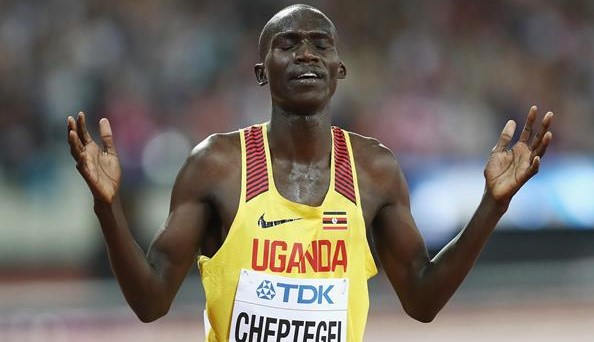 Uganda's Joshua Cheptegei claimed a double in the Commonwealth Games after adding on a 10,000m gold medal on top of the 5,000m title he won earlier in the week.

Joshua Cheptegei claimed a double in the Commonwealth Games after adding on a 10,000m gold medal on top of the 5,000m title he won earlier in the week. Cheptegei upstaged the Kenyans once again with 20-year old Rodgers Kwemoi managing silver after finishing third.

Cheptegei clinched victory in a new Games Record of 27:19.62. Kwemoi, the reigning World Junior Champion held on for bronze coming in third with a time of 27:28.66. The other Kenyans in the race, Jonathan Ndiku and Josphat Koech finished eighth and 10 th respectively.

Ndiku who won the steeplechase gold at the last Commonwealth games in Gold Coast, Australia paid the price for having pumped the pace early and failing to hold on till the final bit. It remained a closely knit group for the first 15 laps but with four remaining the boys were separated from the men.

The Ugandan duo of Cheptegei and Jacob Kiplimo stuck at the front behind Canadian Ahmed Mohammed and New Zealand’s Andy Robertson while Kwemoi quietly pat his feet in the middle of the group.

Cheptegei and Ahmed decided to bolt away with two laps to go, injecting some steaming pace. Kwemoi could not be able to sustain that sudden injection of pace and decided to stay behind.

At the bell, Cheptegei took over the leadership, as Ahmed painfully tried to keep up. At the end of it all, the Canadian could not sustain the tempo and Cheptegei had his wa for a Commonwealth double.

Earlier, Margaret Nyairera’s attempt to beat South African Caster Semenya in the 800m ended in futility with the Olympic champion claiming victory in a new games record. Nyairera timed one minute 58.07 seconds at second place behind Semenya who completed a double crossing the finish line in a new Games Record time of one minute 56.68 seconds.

The other two Kenyans in the race, Emily Tuwei and Eglay Nalyanya came seventh and eight respectively.