Chapa Dimba Na Safaricom to kick off in Garissa 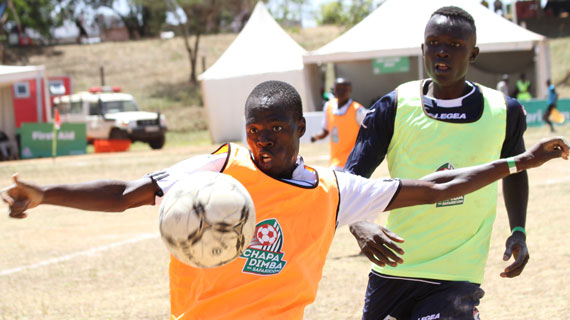 It is all systems go for this year's edition of The Chapa Dimba Na Safaricom soccer championships set for Garissa.

The third edition of the Safaricom Grassroots soccer championships - Chapa Dimba - will kick off this weekend with the first regional finals set for Garissa.

The finals will be held on Saturday 23rd and Sunday 24th November at the Garissa University with regional defending champions Berlin FC hoping to retain their crown .

This is the first of the eight regional finals whose winner will walk away with a whooping One Million Shillings in cash prize.

In addition , a select team of 16 boys and 16 girls will later earn a trip of a lifetime to travel to Spain where they will attend a ten days coaching clinic and an opportunity to play against some of the finest Spanish La Liga Football Academies.

After Garissa, the next regional finals will be held in Mombasa on the weekend of 7th and 8th December, giving young players opportunities to explore their potential at an early age.

Apart from getting  the opportunity to learn and interact with their peers on and off the pitch , all participating teams will also take part in life skills and mentorship clinics ahead of the action.