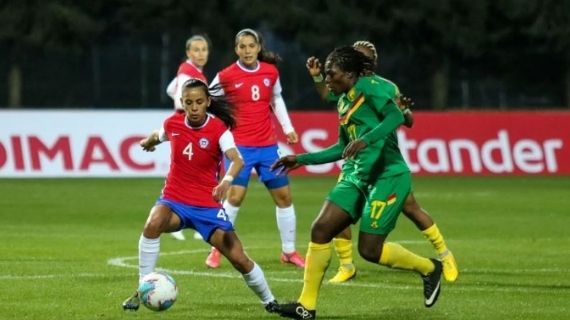 The Lionesses suffered a huge setback in the first leg, after falling to La Roja 2-1 courtesy of Camila Saez and Carla Guerrero's efforts despite Ajara Nchout's late consolation for the Africans on Saturday.

Action between Cameroon and Chile

Cameroon women's team will miss the Olympic Games for the second time in a row, after a drab 0-0 draw against Chile in the CAF–CONMEBOL intercontinental playoff second leg on Tuesday in Antalya, Turkey.

The Lionesses suffered a huge setback in the first leg, after falling to La Roja 2-1 courtesy of Camila Saez and Carla Guerrero's efforts despite Ajara Nchout's late consolation for the Africans on Saturday.

Just as expected at the Arslan Zeki Demirci Sports Complex, Nchout and Gabrielle Onguene controlled the first-half proceedings, with the latter firing a long shot only for Chile goalkeeper Christiane Endler to make an easy save.

However, Yanara Aedo and Guerrero came close for the Chileans but Cameroon goalkeeper Michaelys Bihina was at her best to deny heading into half time.

On resuming the contest, the Central Africans attempted to create some chances through Nchout and Onguene in the second half but they could not find a way past the defence of Jose Letelier's side.

On the heels of their pouring attacks, Brigitte Omboudou was sent off, after receiving her second yellow card in the 64th minute, leaving her team-mates a player down to avoid conceding from Chile for the final 25 minutes.

The draw saw the dream of an Olympic return for Cameroon dashed, while the South Americans finally secured their maiden qualification ticket to the Games this summer, following a 2-1 aggregate triumph.

This also means Zambia will be the only African representative in the Olympic finals draw scheduled for 21 April at FIFA headquarters in Zurich, Switzerland.