Blow for Stars as Mandela picks up knee injury 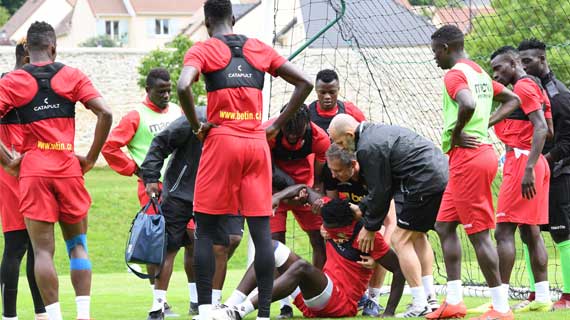 Brian Mandela is doubtful for the Africa Cup of Nations that start in less than a week after he picked up a nasty knee injury in the team's France training camp.

Harambee Stars will be without defender Brian Mandela for the African Cup of Nations after picking up a nasty knee injury in training on Monday. Mandela who has just come back from another long term injury lay off fell awkwardly on his knee while he tried to make a goal saving tackle during a session at their training base in Paris.

Mandela could not walk on his own from the training ground and had to take a vehicle to the team’s accommodation before he was taken to hospital for scans. He came back with a protective gear on his knee, walking on crutches.

“It can be problematic for the tournament because he (Mandela) is one of our key players. It’s like it; that is the life of football. We need to find another solution. It doesn’t feel good for him and for us,” Migne said as he expressed his heartbreak.

He added; “We will start thinking about new options, maybe Joash will be back. For me it can be another chance for another player to show their quality.”

Musa Mohammed is also a concern as he has not trained since coming off the friendly match against Madagascar last Friday. However, his absence is only precautionary but is expected to be back in training by Thursday.

Migne wil now resort to a new partnership for next Saturday’s friendly match against DR Congo in Madrid, Spain. In his list of options is youngster Joseph Okumu, Joash Onyango and David Owino.